Wei Zhili (pictured below) and Ke Chengbing, both editors of labor rights news and advocacy website “New Generation” (xinshengdai), have been held in incommunicado detention since March 2019. Their detention comes amid a crackdown across China on students and activists advocating for worker’s’ rights. Denied access to a lawyer of their choice, they are at grave risk of torture and other ill-treatment. 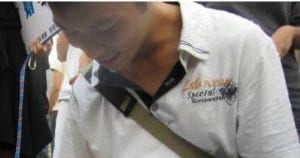 I am writing to express my concern about the ongoing incommunicado detention of Wei Zhili and Ke Chengbing who were first taken away from their homes by police on 20 March 2019. Prior to their detention, the activists used the online platform “New Generation” (xinshengdai) to publish information about cases of migrant workers from Hunan Province who had contracted occupational lung disease, while also helping them to defend their rights and lodge labor rights complaints to the authorities.

On 26 and 27 March, Shenzhen City Ping Shan Public Security Sub-bureau informed the families that Wei and Ke were criminally detained on suspicion of “picking quarrels and provoking trouble” in Shenzhen City No. 2 detention center. Three weeks later however, the police notified the family that they had been transferred to residential surveillance at a designated location.

Family members of the two activists have also been facing pressure from the police to dismiss their lawyers and remain silent about their cases. Wei Zhili’s wife, Zheng Churan, is a well-known feminist activist who has relentlessly campaigned for Wei’s release. Facing continued harassment, Zheng’s WeChat accounts have been deleted and she has been evicted by her landlord. Denied access to legal counsel of their choice, their families or others, Wei Zhili and Ke Chengbing are at serious risk of torture and other ill-treatment.