Iranian-Swedish academic Ahmadreza Djalali has been held incommunicado in Tehran’s Evin prison since 24 November 2020, when he learned that his death sentence for “corruption on earth” (efsad-e fel-arz) was to be carried out imminently. In late December 2020, his family learned that Ahmadreza Djalali’s execution was halted for one month. He remains at risk of execution. 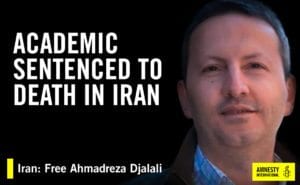 Iranian-Swedish academic and medical doctor Ahmadreza Djalali, who is at risk of execution, has been subjected to incommunicado detention in Tehran’s Evin prison for seven weeks. In an undated handwritten letter, provided by prison officials to Ahmadreza Djalali’s lawyer in late December 2020 following multiple requests to contact him, Ahmadreza Djalali wrote that he had been in prolonged solitary confinement for 33 days. His lawyer and family last saw Ahmadreza Djalali on 24 November 2020 when they were told that Ahmadreza Djalali’s execution would be carried out within a week and this was the date of his last phone call to this family. In late December 2020, his family learned that the office for implementation of sentences had postponed Ahmadreza Djalali’s execution for one month. His incommunicado detention raises serious concerns about the imminence of his execution given the Iranian authorities’ pattern of executing death row prisoners in secret after placing them in solitary confinement and denying them contact with the outside word.

Ahmadreza Djalali was sentenced to death for “corruption on earth” (efsad-e fel-arz) in October 2017 after a grossly unfair trial before Branch 15 of the Revolutionary Court in Tehran. The court relied primarily on “confessions” that Ahmadreza Djalali says were obtained under torture and other ill-treatment while he was held in prolonged solitary confinement without access to a lawyer. These included threats to execute him, kill or otherwise harm his children, who live in Sweden, and his mother, who lives in Iran. Amnesty International has consistently held that the offense of “corruption on earth” fails to meet requirements for clarity and precision needed in criminal law and breaches the principle of legality and legal certainty. On 9 December 2018, his lawyers learned that Branch 1 of the Supreme Court had upheld his death sentence.

I ask you to immediately stop any plans to execute Ahmadreza Djalali and immediately provide him access to his family and lawyer. His conviction and sentence must be quashed, and he should be released immediately and accorded an enforceable right to compensation, as per the recommendation of the UN Working Group on Arbitrary Detention. Pending his release, ensure that Ahmadreza Djalali is moved out of prolonged solitary confinement and protected from torture and other ill-treatment, and order a prompt, independent, effective, and impartial investigation into his allegations of torture and other ill-treatment. I call on you to establish an official moratorium on executions with a view to abolishing the death penalty.