On 11 February 2019, Hakeem Ali al-Araibi was released from Bangkok’s remand prison after the Bahraini authorities dropped their extradition request. He flew back to Australia the same day. Hakeem was arrested on 27 November 2018, by the Thai authorities upon arrival at Bangkok’s international airport, based on an Interpol red notice requesting his extradition to Bahrain. He was expected to serve an unfair 10-year prison sentence there, and would have been at risk of torture and other ill-treatment in detention. Upon his return to Australia, Hakeem thanked the human rights organizations that had acted on his behalf. 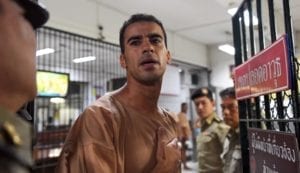 On 11 February 2019, the Thai authorities ordered the release of Bahraini footballer Hakeem Ali al-Araibi, as Bahrain was no longer seeking his extradition. He was immediately flown back to Australia. Tim O’Connor, a campaigner with Amnesty International Australia, came to the airport on 12 February to see Hakeem return. Hakeem told the press that he was “feeling jubilant” and that it was a day of celebration. The same day, Bahrain’s Foreign Ministry said that Bahrain would continue to seek legal action against Hakeem, as he had been convicted by a Bahraini court.

The treatment of Hakeem prior to his release shows serious deficiencies in Thailand’s protection of refugees. It highlights the need for authorities to institute measures to systematically protect refugee rights and respect the principle of non–refoulement. Without either a formal legal status for refugees or adequate protection against refoulement, officials have frequently exercised their discretionary powers to return individuals to countries where they have faced human rights violations.

Hakeem’s arrest in Thailand on 27 November 2018 sparked an international outcry and diplomatic pressure to secure his release. Sporting groups, non-government organisations (NGOs), unions, governments, as well as grassroots pressure from around the world rallied in a global campaign of solidarity. Among the participants were at least 18 Amnesty International sections, and over 135,000 Amnesty supporters who sent appeal letters to the authorities.

On 7 November 2012, Hakeem was arrested and detained in Bahrain, during which he reports he was tortured by the Bahraini authorities, who alleged that he had taken part in an arson attack on 3 November 2012 on a police station located southwest of the capital, Manama. Hakeem denied the charges, stating that at the time of the attack on the police station, he was playing a match for his local club, northeast of Manama. He was released on bail four months later. On 6 January 2014, following an unfair trial, Hakeem was sentenced in absentia to 10 years in prison, based largely on the coerced confession of his co-defendant and brother, Emad Ali al-Araibi. At the time of his conviction, Hakeem was in Qatar with the Bahrain national football team to participate in the West Asian Football Federation Championship (WAFF). In May 2014 he fled to Australia and claimed asylum there. He was granted a Permanent Protection Visa in November 2017, allowing him to reside in and to travel to and from Australia, provided he does not travel to Bahrain.