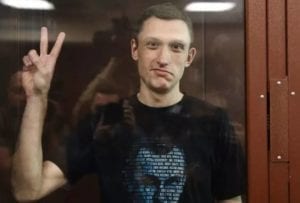 Konstantin Kotov is a veteran activist, who over the years has participated in numerous peaceful protests in Moscow against human rights violations, and in solidarity with prisoners of conscience. Many of the rallies he participated in were not “sanctioned” by the authorities due to Russia’s unduly restrictive regulation for peaceful assemblies. However, all of them were peaceful, and Konstantin Kotov never used, or advocated, violence.

On 10 August 2019, Konstantin Kotov was arrested on his way to a planned protest against the disqualification of opposition candidates from the Moscow City Duma elections. He was charged with “repeated violations of regulations of public assemblies” under Article 212.1 of the Criminal Code. Article 212.1 makes it a criminal offence, punishable by up to five years’ imprisonment, to violate any of the unduly restrictive norms governing public assemblies more than three times within six months. This article violates Russia’s international human rights obligations to respect, protect and fulfil the right to peaceful assembly.

Unusually for Russia, his trial at Tverskoy District Court in Moscow lasted less than a day. During his trial, the judge refused to consider whether Konstantin Kotov’s actions constituted, or amounted to, any serious harm to others, and declined to hear the testimony of most witnesses for the defense or watch available video footage of Konstantin Kotov’s purported “crime”.

Konstantin Kotov’s case was then reviewed by the Moscow City Court, which, on 20 April, upheld his conviction and reduced his prison sentence to a year-and-a-half. An Amnesty International representative gave testimony at the trial. Konstantin Kotov’s appeal against the decision was denied.

Konstantin Kotov is grateful to Amnesty International and all the activists that wrote appeals on his behalf, and believes their support contributed to ensuring his early release. Kostantin Kotov continues his fight for justice and is taking further legal steps including an appeal to the European Court of Human Rights.