Opposition leader Sharofiddin Gadoev returned safely to the Netherlands on 2 March. He had been held by the Tajik authorities following his arbitrary arrest in Moscow on 14 February and forcible return to Tajikistan. 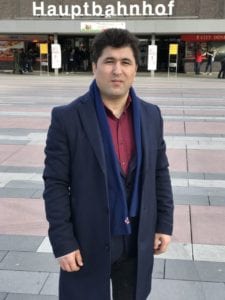 On 2 March Sharofiddin Gadoev was transferred without identification documents from Dushanbe, Tajikistan’s capital, to Frankfurt, Germany, and returned safely to the Netherlands the same day. He is the leader of Group 24, an opposition political movement banned in Tajikistan, who legally resides in the Netherlands.

Sharofiddin Gadoev was arbitrarily detained on 14 February by the authorities in Moscow, during a trip to meet representatives of the Russian Security Council. On 15 February, he reappeared in Dushanbe, and on 20 February he was transferred to an undisclosed place by officers from the Tajik Interior Ministry and special forces. The Tajik authorities did not disclose his whereabouts or lay official criminal or administrative charges against the activist.

Prior to his trip to Russia Sharofiddin Gadoev recorded a precautionary video stating he had no intention of returning to Tajikistan, where he is at risk of torture and other ill-treatment and unfair prosecution. After his forcible return to Dushanbe photos were published falsely claiming that Sharofiddin Gadoev was visiting friends and family in Tajikistan.

Sharofiddin Gadoev, a is believed to have been released following interventions from international human rights organisations and European governments.