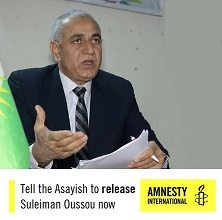 Suleiman Abdulmajid Oussou, a 58-year-old activist and father of six, was released on 24 June from Allaya prison in Qamishli, north-eastern Syria, for treatment and under the condition that he signs a written statement pledging that he will attend the court hearings when notified. Suleiman Oussou is currently receiving the medical care his condition requires and recovering at home.

Suleiman Oussou was initially arrested on 23 May by the Asayish forces, the police force of the Democratic Union Party (PYD)-led Autonomous Administration, in the north-eastern region of Syria, from his house in the city of Qamishli. He was then detained in Allaya prison in poor conditions and while suffering a critical health condition. On 21 June, his health deteriorated significantly following a cardiac stroke. As a result, he was rushed in an ambulance to Rahma hospital in Qamishli to receive medical care. However, the same night, he was transferred back to prison. The poor detention conditions such as the lack of proper ventilation system and insufficient food provision were aggravating his health condition.

No further action is requested from UA network. Thank you to all those who sent appeals.