On 3 August, the Pskov Regional Court, in western Russia, commuted Gennadiy Shpakovsky’s six-and-a-half-years’ prison sentence to a suspended sentence of the same duration including two years on probation. The 61-year-old Jehovah’s Witness was released from detention on the same day. Gennadiy Shpakovsky was prosecuted solely for exercising his right to freedom of religion. He and other Jehovah’s Witnesses in Russia, where practicing their faith is a crime, remain at risk of imprisonment. 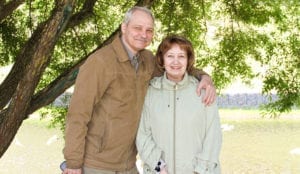 On 3 August, the Pskov Regional Court, in western Russia, commuted Gennadiy Shpakovsky’s six-and-a-half-years’ prison sentence to a suspended sentence of the same duration and placed him under probation for the two first years. On the same day, the 61-year-old Jehovah’s Witness was released from detention and greeted by his wife and daughter.

Jehovah’s Witnesses face persecution in Russia after their organization was arbitrarily banned as “extremist” in April 2017. Gennady Shpakovsky became the eleventh Jehovah’s Witness sentenced to a jail term by Russian courts (including two persons in occupied Crimea). A criminal case against him was initiated on 31 May 2018. Prior to this, according to information from the international Jehovah’s Witnesses organization, he had been under surveillance by the security services.

Gennady Shpakovsky was detained on 3 June 2018 when he was discussing the Bible with friends. Armed security services and riot police officers broke into the flat and conducted a six-hour search of the premises. Gennady Shpakovsky and his friends were then subjected to questioning about their activities for several hours. They reported being threatened and harassed during the questioning. Gennady Shpakovsky was charged with “organization of the activities of an extremist organization” (Article 282.2 (1) of the Russian Criminal Code) and “financing of extremist activity” (Article 282.3 (1) of the Russian Criminal Code). He was convicted on 9 June 2020, his sentence being the harshest issued to date against a Jehovah’s Witness in modern Russia.

Amnesty International regards the criminalization of Jehovah’s Witnesses’ organization in Russia as an arbitrary and discriminatory measure, and a violation of the right to freedom of religion. Amnesty International has called on the Russian authorities to quash the respective judicial decisions.