On 5 April 2019, human rights defender Zine El Abidine Erradi was released after serving a one-year sentence in Agadir local prison, following an unfair trial. Zine El Abidine holds a refugee status in France and had been arrested upon his arrival in Morocco to visit his father. As of 15 May, he could eventually come back in safety in France after receiving his travel documents. 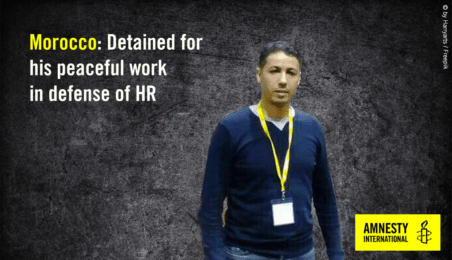 On 5 April 2019, human rights defender Zine El Abidine Erradi was released after serving a one-year sentence, solely in relation to his peaceful activism. After the Moroccan and French authorities granted him the needed travel documents on 15 May 2019, he could eventually travel back to France, where he holds a refugee status.

In April 2018, Moroccan authorities arrested Zine El Abidine Erradi upon his arrival from France, at Agadir airport in Morocco. His arrest followed a warrant issued in absentia in December 2014 by a court in Agadir, based on trumped-up charges, including “violence and insults to public officers” and “destroying public properties”. Zine El Abidine was travelling to Morocco for exceptional circumstances, with a travel document provided by the French authorities.

Before leaving Morocco to seek asylum in France, he had been arrested twice and prosecuted three times for his work in defence of human rights in Sidi Ifni, his hometown, in southern Morocco.

Amnesty International has been calling for Zine El Abidine Erradi’s immediate and unconditional release, as he was held solely for his peaceful work in defence of human rights, and for his safe return to France. Amnesty’s mobilisation, particularly in Morocco and France, has been essential to increase the visibility on his case, and to pressure the authorities to grant him a safe return to France.