Prisoner of conscience and environmental activist, Dr. Ariel Ruiz Urquiola, was sentenced in Cuba to one-year imprisonment for contempt. On 3 July he was released with conditions. 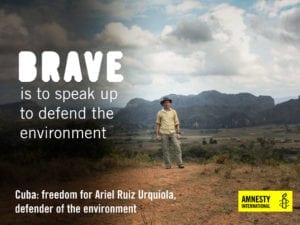 Prisoner of conscience and environmental activist, Dr. Ariel Ruiz Urquiola, was sentenced in Cuba to one-year imprisonment for contempt. On 3 July he was released with conditions.

Authorities released prisoner of conscience, Ariel Ruiz Urquiola, a doctor in biological sciences who previously worked as a researcher at the University of Havana, on 3 July 2018. According to documents Amnesty International was able to review, prison authorities granted Ariel a conditional release (“licencia extrapenal”) following a prolonged hunger strike.

In Cuba, people imprisoned for solely expressing their beliefs are frequently set free under “licencia extrapenal”. This form of conditional release means that those convicted are allowed to spend the remainder of their sentences outside prison. Under this condition, the authorities could arrest Ariel at any time and return him to prison to complete his sentence.

Ariel Ruiz Urquiola was sentenced to one year of imprisonment for contempt (“desacato”) for allegedly disrespecting two forest rangers. The “desacato” (article 144.1 of Cuba’s Criminal Code) provision in Cuban criminal law is inconsistent with international law. It is an undue restriction on the right to freedom of expression, as public officials should tolerate more criticism than private individuals. The use of defamation laws with the purpose or effect of inhibiting legitimate criticism of government or public officials violates the right to freedom of expression.

Many thanks to all who sent appeals. No further action is requested from the UA network.