On 22 May 2019, Thai authorities renewed their crackdown on peaceful protesters by pursuing the prosecution of a group of 17 individuals, including an opposition party politician, for their participation in a peaceful protest outside a Bangkok police station on 24 June 2015. Their gatherings took place during the military government’s ban on “political” gatherings of five or more persons. Filing charges against these individuals nearly four years after their peaceful demonstration appears to be a politically motivated decision to silence perceived opponents and has a chilling effect on the rights to freedom of expression and peaceful assembly in Thailand. 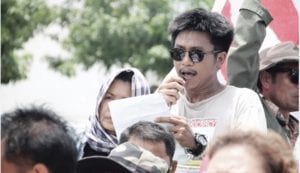 On 22 May 2019 authorities charged the group with sedition and taking part in a public assembly of more than ten persons that threatens to “breach the peace.” They would face up to seven and a half years’ imprisonment if found guilty. Thanathorn Juangroongruangkit, leader of the Future Forward Party, would face a further two years’ imprisonment for “assisting someone who has committed a serious offense to escape” under Article 189 of the Thai Penal Code, for allegedly giving activist Rangsiman Rome a lift from the police station despite the fact that the protesters were allowed to leave normally.