On 22 October, the Dmitrovgrad town court, in Russia’s Ulyanovsk region, rejected the parole application of 21-year-old human rights defender, Yan Sidorov. Yan Sidorov and his friend, Vladislav Mordasov, are prisoners of conscience, serving sentences of four years for trying to organize a peaceful protest in November 2017 in support of dozens of Rostov-on-Don residents who had lost their houses in mass fires. Yan Sidorov is appealing the decision. 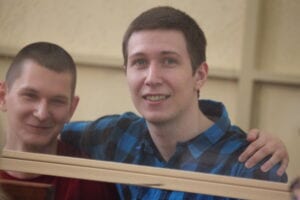 I am writing to you concerning human rights defender Yan Sidorov who is serving his sentence at IK-10. On 22 October, the Dmitrovgrad Town Court rejected his parole application. His defense team has appealed this decision.

Yan Sidorov and his friend, Vladislav Mordasov, were arrested on 5 November 2017 for trying to organize a peaceful protest in support of dozens of Rostov-on-Don residents who had lost their houses in mass fires. They were 18 and 21 years old, respectively, at the time. They were falsely charged with “organizing mass disturbances” and following an unfair trial, on 4 October 2019, they were sentenced – Yan Sidorov to six years and six months and Vladislav Mordasov to six years and seven months in strict regime penal colony. On 10 December, the Third Court of Appeal in Rostov-on-Don upheld their convictions. In July 2020, each of their sentences were reduced to four years.

I urge you to use your authority to support Yan Sidorov’s appeal for parole.