On July 24, 2021, human rights defenders Elisée Lwatumba Kasonia and Eric Muhindo Muvumbu were released on bail. They were arrested on April 19, 2021 while calling for a general strike to protest against increased deadly armed attacks in the north eastern territory of Beni. The two activists have been charged with “inciting civil disobedience” and “threatening an attack.” Amnesty International believes the charges, which remain pending, are baseless and must be dropped. 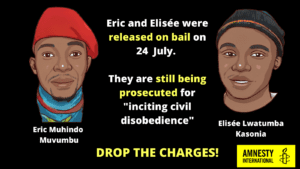 I write to thank you for your efforts for the release of human rights defenders, Elisée Lwatumba Kasonia and Eric Muhindo Muvumbu, members of the youth movement, Lutte pour le Changement (LUCHA). The two men were granted bail on July 21 and released on July 24, 2021 following three months of arbitrary detention. While we celebrate their release, they still face serious trumped-up charges of “inciting civil disobedience” and “threatening an attack.” They have also been placed under stringent bail conditions and not allowed to leave the city of Butembo, return to public places, or places like airports, train stations, stadiums. They are also required to present themselves before the judicial authorities when needed. These conditions infringe on their basic rights to freedom of movement and expression.

Elisée Lwatumba Kasonia and Eric Muhindo Muvumbu were arrested on April 19, 2021 in the town of Butembo, in the Democratic Republic of Congo’s (DRC) North Kivu province, by officers believed to be members of the National Intelligence Agency (ANR), while they were walking on the street with megaphones calling for a general strike in Butembo to protest against increased security incidents and killings of civilians in the neighbouring territory of Beni. The call to strike was an appeal from LUCHA and other civil society organizations in the region to peacefully protest against the government’s failure to protect civilians from armed groups attacks.

Elisée Lwatumba Kasonia and Eric Muhindo Muvumbu’s peaceful act of calling for a general strike to express their views on the government’s responsibility to protect civilians is not a crime. Amnesty International is deeply concerned that the prosecution of the two human rights defenders is a violation of their right to freedom of expression and peaceful assembly as guaranteed by DRC’s constitution and the African Charter for Human and Peoples’ Rights.

I therefore call on you to do everything in your power to ensure that the charges against Elisée Lwatumba Kasonia and Eric Muhindo Muvumbu are dropped, the arbitrary restrictions imposed on their right to freedom of movement and expression are lifted, and that they and are able to continue to do their vital human rights work without fear of further prosecution and/or reprisals.