Concerns are growing over activist Alaa Abdel Fattah’s life and wellbeing after his family and lawyer learned about his suicidal thoughts due to his unjust detention and cruel prison conditions. On September 29, 2021, Alaa Abdel Fattah and human rights lawyer Mohamed Baker will complete two years of arbitrary detention without charge or trial solely for their peaceful exercise of human rights. Amnesty International calls for their immediate and unconditional release. 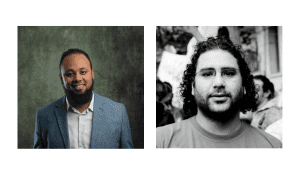 I am writing to raise my concerns about the ongoing arbitrary detention of activist Alaa Abdel Fattah and lawyer Mohamed Baker, who have been in pre-trial detention over unfounded terrorist-related accusations since September 29, 2019, solely for the peaceful exercise of their human rights. They are held in cruel, inhuman and degrading conditions, that violate the absolute prohibition of torture and other ill-treatment, at the Tora Maximum Security 2 Prison, in Cairo, the Egyptian capital.

On September 13, 2021 Alaa Abdel Fattah’s lawyer and family publicly raised the alarm about him being in “imminent danger” and expressed concerns that he may be suicidal. In a statement published on September 14, 2021, his family denounced the authorities’ barring him from reading books and newspapers and accessing sunlight and clean water, noting that these horrid conditions are having a detrimental impact on his mental health. They wrote: “His mental health is failing after two years of careful planning and cruel implementation by the interior ministry and National Security Agency [a specialized police force with a mandate of policing terrorism and security threats]. His life is in danger, in a prison that operates completely outside the space of the law and with the complete disregard of all officials, foremost among them the public prosecutor, the interior minister, the justice minister, and of course the president.” Despite his mother, Leila Souef’s, near daily trips to, and hours-long wait at, the prison gate since September 19, 2021, the prison authorities have been cruelly denying her a letter from him raising further concerns about his wellbeing. Prison authorities are holding Mohamed Baker in similarly cruel conditions. He is confined around the clock in a small and poorly ventilated cell and deprived of a bed, books, and newspapers.

Both men remain in pre-trial detention pending investigations into bogus terrorism accusations in violation of the Egyptian Code of Criminal Procedures, which sets the maximum duration for pre-trial detention at two years for crimes punishable by the death penalty or life imprisonment. They have not been charged, presented with evidence linking them to any crime, or allowed to challenge the lawfulness of their detention.

I urge you to release Alaa Abdel Fattah and Mohamed Baker immediately and unconditionally and drop all charges against them as they are detained solely for peacefully exercising their human rights. Pending their release, I urge you to ensure that they are held in conditions meeting international standards, including being granted access to adequate medical care, including in specialized facilities outside prison when required, protected from torture and other ill-treatment, and allowed to regularly communicate with their families.