September 29, 2022 marked a year that the Court of Appeal of Ngozi upheld the conviction and five-year prison sentence of Burundian lawyer, Tony Germain Nkina. He was arrested on October 13, 2020, charged with endangering international state security, and convicted on June 15, 2021 for “collaborating with rebels who attacked Burundi.” However, the evidence presented against him indicates that his prosecution is motivated by his former human rights work. The hearing of his appeal of the Court of Appeal of Ngozi’s decision is scheduled on October 7, 2022. Amnesty International continues to call for Tony Germain Nkina’s immediate and unconditional release. 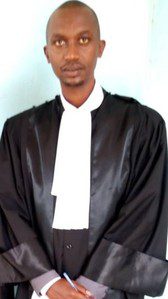 I am appalled by the continued unlawful detention of human rights lawyer, Tony Germain Nkina, whose conviction on trumped-up charges was upheld by the Court of Appeal of Ngozi a year ago, on September 29, 2021. He appealed this decision through the Supreme Court’s cassation proceeding. The hearing at the Supreme Court is scheduled for October 7, 2022. Tony Germain Nkina was sentenced to five-year imprisonment by the Court of Kayanza on June 15, 2021 and a fine of one million Burundian francs ($USD 500).

He was arrested on October 13, 2020, in Kayanza province, northern Burundi, and accused of collaborating with the armed opposition group, RED-Tabara while visiting a client in Kabarore commune and advising him on a land dispute case. He remains held in Ngozi prison in northern Burundi.

During the appeal hearing, the prosecution failed again to substantiate allegations that Tony Germain Nkina was linked in any way to RED-Tabara or produce any witness to support their case against the lawyer.

In a statement issued on October 8, 2021, Amnesty International and five other human rights organizations denounced the decision of the Court of Appeal and pointed to the fact that Burundi continues on a sad path of shrinking civic space despite your multiple promises of a positive change in upholding its human rights obligations since your inauguration in June 2020.