On 30 January, the Bubanza Tribunal in northern Burundi sentenced journalists Agnès Ndirubusa, Christine Kamikazi, Egide Harerimana and Térence Mpozenzi to two years and six months in prison. The initial charge of “conspiring to undermine state security” was changed during the sentencing to a charge of “impossible attempt to undermine state security”. The tribunal acquitted their driver, Adolphe Masambarakiza. The four have appealed their sentence. Amnesty International believes the four are being persecuted simply for doing their legitimate work as journalists. 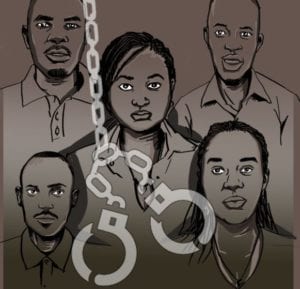 I am very concerned by the sentencing of Iwacu journalists Agnès Ndirubusa, Christine Kamikazi, Egide Harerimana and Térence Mpozenzi to two years and six months in prison on 30 January 2020 by the Bubanza Tribunal.

I believe Agnès Ndirubusa, Christine Kamikazi, Egide Harerimana and Térence Mpozenzi were prosecuted for doing their journalistic work and peacefully exercising their right to freedom of expression. The activity for which they have been convicted – travelling to an area to investigate recent events – is precisely the kind of job journalists are expected to undertake.

Therefore, I call on you to immediately and unconditionally release the journalists and drop the charges against them.