Jailed human rights lawyer Nasrin Sotoudeh’s health is at serious risk after the Iranian authorities returned her to prison from the hospital, even though a doctor said she needed a heart-related medical procedure. She had been hospitalized when her health severely deteriorated while on a hunger strike, which she is doing in protest of the Iranian authorities abuses in the criminal justice system, including their refusal to release eligible prisoners held on politically motivated charges. She is a prisoner of conscience who must be released immediately and unconditionally. 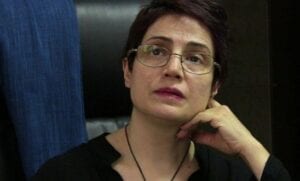 On 10 August 2020, unjustly jailed human rights lawyer Nasrin Sotoudeh, aged 57, began a hunger strike in protest at the Iranian authorities’ ongoing abuses in the criminal justice system. On 19 September 2020, Nasrin Sotoudeh, whose health deteriorated on hunger strike, was transferred to a hospital outside of prison. Reza Khandan, Nasrin Sotoudeh’s husband, said on Twitter at the time that she was in “dire health” and was suffering from an irregular heartbeat, low blood pressure, and shortness of breath making her unable to complete sentences. After she was transferred to Tehran’s Evin prison on 23 September, she communicated in a phone call that she needed a medical procedure on her heart according to doctors who treated her in the hospital outside prison. She is now held in the women’s ward quarantine section of Evin prison while on hunger strike, without the round-the-clock presence of health professionals monitoring her condition. Her transfer from hospital to the quarantine section of the prison raises serious concerns that she is not receiving the specialized medical care she requires. During her hospitalization, security forces barred her family from communicating with her and her family was not able to access her treating physicians or test results. Nasrin Sotodueh was sentenced to a total of 38 years and six months in prison and 148 lashes following two grossly unfair trials in 2016 and 2018 for her peaceful human rights work, including opposing Iran’s abusive, degrading and discriminatory forced veiling laws and the death penalty. In late March 2020, a prison official verbally told Nasrin Sotoudeh that she had been granted a pardon for the 2016 sentence, but she has not been formally notified in writing. If this pardon applies, under Iran’s sentencing guidelines, she must serve 12 years.

I urge you to release Nasrin Sotoudeh immediately and unconditionally as she is a prisoner of conscience, jailed solely for her peaceful human rights work. Pending her release, ensure that she is provided with the specialized health care she needs outside prison, in compliance with medical ethics, including the principles of confidentiality, autonomy and informed consent, and that she has family visits. I also urge you to ensure an end to state harassment and intimidation of her family.