Human rights lawyer and China’s labour rights advocate Chow Hang-tung was charged for “inciting subversion” under the new National Security Law on September 9, 2021 and faces potential 10 years’ imprisonment. At the time of being charged, she was the vice-chair of the Hong Kong Alliance in Support of Patriotic Democratic Movements of China (the Alliance), the organizer of the annual Hong Kong vigil commemorating the 1989 Tiananmen crackdown since 1990. Chow Hang-tung was exercising her fundamental human right of freedom of expression through peaceful means, and charges against her must be dropped and they must be released immediately. 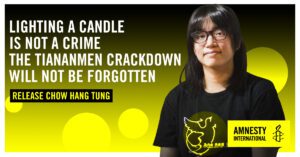 I am writing to express my grave concern for Chow Hang-tung (鄒幸彤), one of the organizers of the annual Tiananmen vigil who has been arrested and charged for “inciting subversion”. It is alarming to learn that she and other core members of the Hong Kong Alliance in Support of Patriotic Democratic Movements of China (the Alliance) was targeted simply for commemorating the 1989 Tiananmen crackdown. This act is a mere peaceful expression of opinion, which is permissible under international human rights law and standards, and must not be criminalized.

The Hong Kong government claimed on many occasions, including to the UN in the reply to the list of issues in relation to the periodic report of the implementation of the ICCPR in Hong Kong, that freedoms including freedom of assembly and expression may be restricted for the protection of ‘national security’. However, the prosecution of Chow and other activists who peacefully exercised these rights violates international human rights laws and standards. Such standards specifically state that governments cannot restrict these freedoms on the grounds of national security unless their exercise constitutes the use or credible threat of force that threatens a state’s existence or territorial integrity.

I find it distressing that the national security police used the vigil and other peaceful activism of the Hong Kong Alliance as evidence of endangering national security. Demanding justice and remembering victims of the 1989 Tiananmen crackdown are peaceful expressions that cannot be restricted under the pretext of national security.

I therefore call on you to: