Anti-discrimination NGO workers Cheng Yuan, Liu Yongze and Wu Gejianxiong were tried in secret between 31 August and 4 September 2020 on charges of “subversion of state power”. They face lengthy prison sentences if found guilty. Their families only found out about the trial on 10 September, almost one week after it had ended. No further details about the case have been made public, and all family members have since been barred from entering the Changsha Municipality Intermediate People’s Court. The three men must be immediately and unconditionally released as they are prisoners of conscience, detained solely for carrying out their professional work and peacefully defending human rights. 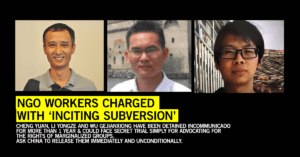 I am writing to express my grave concern for Cheng Yuan (程渊), Liu Yongze (刘永泽) and Wu Gejianxiong (吴葛健雄), who were tried in secret between 31 August and 4 September 2020 on the charge of “subversion of state power” (颠覆国家政权罪). Detained incommunicado for more than 14 months, with no way for their families or lawyers to check their physical and mental well-being, I fear that they are at risk of torture and other ill-treatment.

Family members of the three men were only informed of the trial on 10 September, almost one week after it had concluded. Instead of being duly notified about the case proceedings, the family members had to proactively seek information from government-appointed lawyers themselves. No further details about the case has been provided to them, and all family members have since been barred from entering the Changsha Municipality Intermediate People’s Court. Individuals like Cheng Yuan, Li Yongze and Wu Gejianxiong who advocate for the rights of marginalized groups and work to protect the rights of the most vulnerable people in society are being detained, accused of serious national security charges and subjected to a secret trial. The arbitrary detention for their activities as anti-discrimination NGO workers violates the principle of equality before the law and equal protection of the law under Article 7 of the Universal Declaration of Human Rights.