On 2 January 2021, Ibrahim Ezz el-Din appeared before the Supreme State Security Prosecution for investigations into a new case (No. 1018/2020) over baseless charges of “belonging to a terrorist group”. On 27 December 2020, the Cairo Criminal Court ordered his release in another case, after 13 months of arbitrary pre-trial detention, and he was transferred the next day to the Samanoud police station in the governorate of his residence, in preparation for his release. 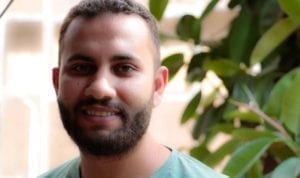 Ibrahim Ezz el-Din, a human rights researcher, detained arbitrarily since June 2019 appeared before the Supreme State Security Prosecution (SSSP) on 2 January 2021, just five days after the Cairo Criminal Court ordered his release on probation in case No. 488/2019. He is now under investigations in a new case (No. 1018/2020) over similar baseless charges of “belonging to a terrorist group”. Proceedings against Ibrahim were unfair as he was not granted the right to effectively challenge the legality of his detention or the right to adequate defense. Ibrahim’s lawyers were present, but they were not allowed to examine the case files including a report prepared by the National Security Agency (NSA), a specialized police force, that was used as the only evidence against him. The SSSP ordered his detention in the new case for 15 days.

After the Cairo Criminal Court ordered Ibrahim’s release on probation on 27 December 2020, he was transferred to the Samanoud police station in the governorate of his residence – a procedure that generally precedes release. Ibrahim remained in detention waiting NSA clearance, but instead he was taken for questioning to the SSSP.

According to informed sources, Ibrahim suffers from an inflammation in his lower back, chronic allergies, and a fungal infection of the tongue due to poor conditions of detention. According to medical professionals familiar with his case, the torture he endured while forcibly disappeared for 167 days from 11 June until 26 November 2019, in addition to the denial of adequate medical care by the Tora Investigation Prison authorities, might have triggered his depression. Ibrahim attempted suicide twice in 2020.

Amnesty International considers Ibrahim Ezz el-Din to be a prisoner of conscience, detained solely for his peaceful human rights work. I urge you to release Ibrahim Ezz El-Din immediately and unconditionally given that his detention stems solely from his peaceful human rights work. I call on you to ensure that, pending his release, he has access to adequate health care, including psychiatric services if needed. I also urge you to open an investigation into his enforced disappearance and the torture to which he has been subjected and bring all those responsible to justice in fair trials without recourse to the death penalty.