A year has passed since Ali Jaseb’s abduction by armed men suspected of belonging to the Popular Mobilization Unit. Despite the Prime Minister’s promise to investigate his whereabouts, there continues to be lack of progress in his case, now compounded by repeated threats to the family. 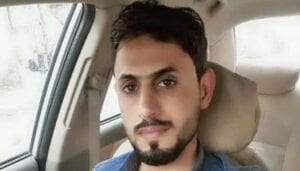 The fate and whereabouts of human rights Lawyer Ali Jaseb Hattab al-Heliji, remain unknown, more than a year after he was forcibly disappeared by armed men believed to be members of the Popular Mobilisation Unit (PMU). On 8 October 2019 Ali Jaseb Hattab al-Heliji received a call from a woman asking to meet for work in a central area of Ammarah in al-Mayssan governorate. On the same day, Ali Jaseb met the with the prospective client as agreed. Shortly after, armed men in two black pick-up trucks suspected of belonging to the PMU dragged him away from his car and drove him away in one of the trucks.

According to information available to Amnesty International, Ali Jaseb’s family received a phone call from an anonymous individual threatening to kill family members after they had appeared on TV to talk about Ali’s case.

Local authorities have seemingly failed to act on these threats which the family reported to the police. The family has received several threats in recent months, including an in-person threat by PMU members in their house. Furthermore, Ali Jaseb’s father filed a lawsuit before the Federal Court in Baghdad relating to his son’s enforced disappearance, but no one has been summoned to date. Also, the Prime Minister recently appointed his military advisor, Mr. Mohammad al-Bayati, to oversee this case, but the family has not been able to obtain any response from him to date.

In light of these recent threats to the family, I am very concerned not only with the apparent lack of progress on Ali Jaseb’s case, but also the fact it is now compounded by the rising threats to his family’s safety.

I call on you to urgently use all resources at your disposal to find Ali Jaseb and secure his safe release; immediately investigate his abduction as an enforced disappearance, in accordance with Iraq’s obligations under international human rights law, and ensure suspects are prosecuted in fair trials; ensure his family are protected from violence, threats and intimidation; and keep his family informed of developments in the investigation on a regular basis and in a timely manner.