On 4 September, the Kursk Regional Court quashed the decision of the Lgov District Court to release imprisoned Danish Jehovah’s Witness Dennis Christensen and sent the case back to the lower court for a new hearing. Dennis Christensen may remain in prison until May 2022. He is a prisoner of conscience persecuted solely for his faith and must be released immediately and unconditionally. 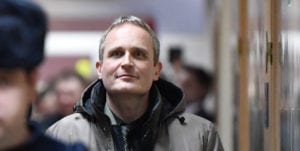 I am dismayed to learn that on 4 September the Kursk Regional Court ruled to overturn the decision of the Lgov District Court granting early release to Jehovah’s Witness Dennis Christensen and sent the case back to the Lgov District Court for review. I am also extremely concerned that the IK-3 penal colony authorities continue to harass Dennis Christensen and that he spent 27 days in a punishment cell for purported disciplinary offenses he did not commit.

Dennis Christensen was convicted in February 2019 and sentenced to six years in prison simply for peacefully exercising his right to freedom of religion while practicing his faith as a Jehovah’s Witness. He is a prisoner of conscience and must be released immediately and unconditionally.

Moreover, Dennis Christensen’s health has deteriorated during his imprisonment and he is suffering from complications caused by pneumonia he contracted last year. According to his lawyer, Dennis Christensen is not provided with the adequate medical care he requires for this and other health issues. His health condition makes him especially vulnerable in the context of the ongoing COVID-19 pandemic. Numerous calls have been made internationally on governments to consider measures aimed at the release of prisoners whose health condition puts them at such risk. In April, the UN High Commissioner for Human Rights urged the governments to release political prisoners and those who might be especially at risk of contracting COVID-19.

I urge you to support Dennis Christensen’s application for an early release and to ensure that, in the meantime, he is not subjected to harassment by the penal colony administration and is provided with adequate medical care.