On July 19, 2021, the Casablanca Court of First Instance convicted Moroccan journalist, Omar Radi, of espionage and rape and sentenced him to six years in prison after a trial marred by blatant breaches of due process rights. His appeal trial started on November 25, 2021. Amnesty International renews its calls for a fair trial and a fair review of Omar Radi’s ongoing detention pending the end of his appeals. 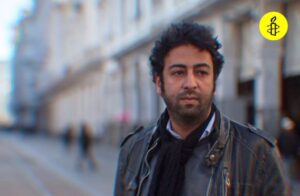 I am writing to express concern over the authorities’ failure to grant detained journalist Omar Radi a fair trial. His was sentenced to six years in prison on July 19, 2021 for espionage and rape following a trial marred by flaws.

Omar Radi’s lawyers’ requests to cross examine a key prosecution witness in the rape charge was denied by court on spurious grounds. The defense team repeatedly asked the court during the trial sessions to summon for testimony a man the alleged victim said was her fiancé and who testified before the invesntigative judge that he was in communication with her the night of the incident. The judge refused all requests, saying there is no need for such cross examination because it will delay the trial. Omar Radi was sentenced for the espionage charge for the receipt of foreign funds and his contacts with foreign diplomats, which are part of his legitimate journalistic and consultancy work. During several hearings throughout the duration of the trial, his defense team emphasized the need to summon all the witnesses in the espionage case, including diplomats and organizations cited by the prosecution, as suspected of being foreign agents fomenting trouble against Morocco. These requests were all refused because the prosecution argued their testimony will not be impartial as they are foreign agents.

Furthermore, Omar Radi’s right to consult with his lawyers privately was not respected. On June 1, 2021, during his trial session at the Casablanca Court of Appeal, he complained to the judge about the lack of privacy in the room where he consults with his defence team in prison. This lack of privacy has been ongoing since the start of the trial. One of his (international) lawyers was also banned from attending his trial after receiving a deportation order.

While the rape accusations must each be considered on their merits and Amnesty International is not well placed to assess their veracity, I note with concern that the UN Working Group on Arbitrary Detention found in another case that the detention of another Moroccan journalist also accused of rape amounted to “judicial harassment attributable to nothing other than his investigative journalism”.

Therefore, I urge you to grant Omar Radi a fair appeal trial in accordance with international fair trial standards and to ensure he is immediately provided an opportunity for his ongoing detention to be reviewed by a court, with a presumption that he will be released pending the end of his trial.