Two Iranian women’s rights defenders, Yasaman Aryani and Monireh Arabshahi, have each been sentenced to 16 years in prison, while a third, Mojgan Keshavarz, has been sentenced to 23 years and six months in prison. They are all prisoners of conscience jailed solely because of their peaceful campaigning against discriminatory forced veiling laws. If the verdicts are upheld on appeal, they would each be required to serve 10 years of their prison sentences. 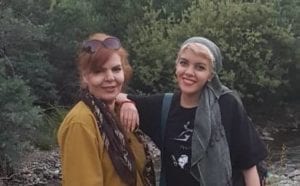 Two women’s rights defenders, Yasaman Aryani and her mother, Monireh Arabshahi, were unjustly sentenced on 31 July 2019 to 16 years in prison, while a third, Mojgan Keshavarz, was unjustly sentenced to 23 years and six months in prison. All three prison sentences consist of a one-year term for “spreading propaganda against the system”, a five-year term for “gathering and colluding to commit crimes against national security”, and a 10-year term for “inciting and facilitating corruption and prostitution” through promoting “unveiling”. Mojgan Keshavarz’s sentence includes an additional prison term of seven years and six months for “insulting Islamic sanctities”. If these convictions and sentences are upheld on appeal, each woman would be required to serve 10 years of her prison sentence, as per sentencing guidelines in Iran’s penal code.

The three women’s rights defenders were arrested in April 2019 in relation to a video that went viral on social media, showing them without their headscarves, distributing flowers to female passengers on a metro train on International Women’s Day on 8 March 2019, and discussing their hopes for a future when all women in Iran would have the freedom to choose what to wear. Following their arrests, they were held in prolonged solitary confinement, which violates the absolute prohibition on torture and other cruel, inhumane and degrading treatment under international law, and pressured to appear before a camera, “confessing” that foreign elements were behind their activism against forced veiling and “repenting” their actions.

I urge you to release Monireh Arabshahi, Yasaman Aryani and Mojgan Keshavarz immediately and unconditionally as they are all prisoners of conscience, jailed solely for their human rights work. Pending their release, ensure that they have regular contact with a lawyer of their choosing. I also urge you to stop criminalizing the work of women’s rights defenders and abolish forced veiling laws.