Iranian university student Ali Younesi has been arbitrarily detained since 10 April 2020. His family believes he is being held in Tehran’s Evin prison, where he has been denied access to a lawyer and permitted only two brief telephone calls to his family. The Iranian authorities have not provided clear reasons for his arrest. He is a prisoner of conscience targeted solely for his family ties and is at risk of torture or other ill-treatment. 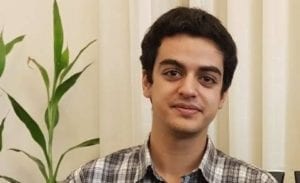 University student Ali Younesi, aged 20, has been arbitrarily detained since his arrest on 10 April 2020, and the Iranian authorities have not provided clear information about the reason for his arrest. Instead, they have publicly accused him, and another university student arrested the same day of ties to “counterrevolutionary” groups and allegedly having “explosive devices” in their homes, violating their right to be presumed innocent and raising serious concerns about their wellbeing.

On the evening of 10 April, Ali Younesi, was taken handcuffed to his home in Tehran by 12 plainclothes security agents. His forehead was split open with a gash and he had blood all over his face and wounds on his body, raising concerns that security agents tortured him. Security agents searched his family home and took Ali Younesi’s parents away to an undisclosed location for interrogations for several hours before releasing them. The security officials did not identify themselves and showed neither an arrest nor search warrant.

Since his arrest, Ali Younesi has been permitted two brief telephone calls with his family and has been denied access to a lawyer. His family was informed by a prosecutor that he has been charged with “undertaking destruction” without providing further information. Then, on 5 May 2020, during his weekly press conference, Iran’s judiciary spokesperson Gholamhossein Esmaili, in apparent reference to Ali Younesi and the other arrested university student, stated that two university students had been arrested for being in contact with “counterrevolutionary” groups. He used a pejorative term to refer to one such group – People’s Mojahedin Organization of Iran (PMOI), an opposition group based outside of Iran and failed to provide any evidence for the judiciary’s accusations. In a public video response posted on social media later the same day, Ali Younesi’s sister, Aida Younesi, stated that the judiciary’s accusations were “ridiculous”.

I call on you to release Ali Younesi and anyone else arbitrarily detained solely based on their families’ real or perceived ties to opposition groups. I ask you to ensure that they are protected from torture and other ill-treatment, provided urgently with any medical care they may require, and given access to their families and a lawyer of their choosing. I also urge you to open an independent investigation into allegations that Ali Younesi had been tortured on the day of his arrest.