Dipti Rani Das, a 17-year-old girl from the Hindu minority community in Bangladesh, was arrested by the police for a Facebook post and has been held at a correction facility for more than a year, since October 28, 2020. Booked under the country’s draconian Digital Security Act on vague charges of “hurting religious sentiment” and “advancing to deteriorate law and order”, she could face up to seven years in jail. She should be released immediately. 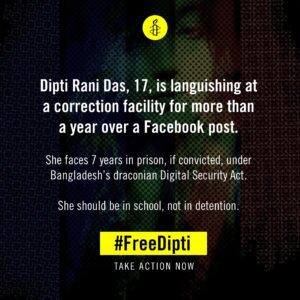 I am deeply concerned by the detention for over a year of Dipti Rani Das, a 17-year-old girl from the Hindu minority community in Bangladesh, over a Facebook post. She faces up to seven years in jail if convicted.

Last year, a photograph of a woman with a Quran between her legs was posted from Dipti Rani Das’s account. She publicly apologized for the post by going to the police station. Locals subsequently attacked her home and demanded that she leave the house. The police on October 28, 2020 arrested her and accused her under the country’s draconian Digital Security Act on vague charges of “hurting religious sentiment” and “advancing to deteriorate law and order”. She has been in detention ever since.

Restrictions to the right to freedom of expression must be clearly provided by law and be strictly necessary and proportionate to a legitimate aim. Protection of religious beliefs is not a permissible ground to restrict the right to freedom of expression, and prohibitions of displays of lack of respect for a religion are incompatible with the International Covenant on Civil and Political Rights, to which Bangladesh is a party.

Dipti Rani Das enrolled for her first year at college when she was arrested and, since then, her education has come to a halt. She faces further risk of being harassed and discriminated against due to the charges pressed against her. Dipti Rani Das should be in school, not in detention.

I urge your government to: