On August 9, 2022, the Specialized Criminal Court in the Saudi capital, Riyadh sentenced, after a grossly unfair trial, Salma al-Shehab, a Saudi activist and academic from Saudi Arabia’s Shi’a minority to 34 years in prison followed by a 34-year travel ban. She was accused, among other things, to “disturbing public order” for using Twitter and retweeting activists who support women’s rights. According to court documents reviewed by Amnesty International, she was detained in solitary confinement for 285 days before she was brought to trial. She was also denied access to legal representation throughout her pre-trial detention, including during interrogations. The Saudi authorities must immediately and unconditionally release Salma al-Shehab and quash her conviction. 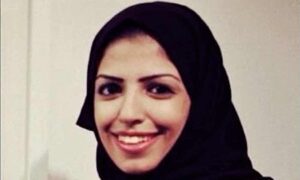 I am alarmed to learn that Salma al-Shehab, an academic and activist, was sentenced to 34 years in prison followed by a 34-year travel ban, by the Specialized Criminal Court (SCC) in Riyadh, the Saudi capital, on August 9, 2022.

On January 14, 2021, she was arrested at the General Directorate of Investigations after she was called in for interrogation a few days before she was due to go back to the United Kingdom to continue her PhD studies at the University of Leeds.

Salma al-Shehab’s trial began on October 25, 2021, and according to court documents reviewed by Amnesty International, she was detained in solitary confinement for 285 days before she was brought to trial, in violation of international standards and Saudi Arabia’s own Law on Criminal Procedures. She had no access to legal representation throughout her pre-trial detention, including during interrogations.

In mid-2022, Salma al-Shehab was initially sentenced to six years in prison under the counter-terrorism law. At her appeal trial, the prosecution demanded a harsher punishment. Her sentence was increased to 34 years based on the discretion of the judge, after her initial sentence was overturned and she was convicted of “supporting those who seek to disrupt public order, destabilize security and the stability of the state” and publishing tweets that “disturb public order, destabilize the security of society and the stability of the state” under the counterterrorism and anti-cybercrime laws.

I urge you to immediately and unconditionally release Salma al-Shehab and quash her conviction as she is being held solely for peacefully exercising her right to freedom of expression. I also call on you to stop equating free speech with “terrorism”, and repeal or substantially amend the counterterrorism and anti-cybercrime laws that criminalize dissent and enact new laws that are fully compatible with international human rights law and standards.