On June 1, 2022, the President Kais Saied arbitrarily dismissed 57 judges and prosecutors on vague grounds that included obstructing terrorism-related investigations, financial corruption, “moral corruption,” “adultery”, and participation in “alcohol-fuelled parties.” On August 10, 2022, the Tunis Administrative Tribunal issued an emergency ruling ordering the reinstatement of 49 of the 57 magistrates, but the government has thus far failed to comply with the tribunal decision. The Ministry of Justice must immediately reinstate all arbitrarily removed judges and prosecutors and respect the tribunal’s decision. 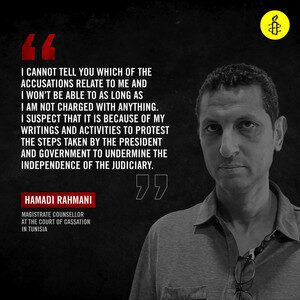 I write to you to urge you to reinstate the 57 judges and prosecutors arbitrarily dismissed on vague grounds that included obstructing terrorism-related investigations, financial corruption, “moral corruption,” and “adultery by President Kais Saied on June 1, including the 49 judges, as ordered by the Tunis Administrative Tribunal which reversed their dismissal. Those men and women should benefit, like any other citizen, from the protection of the rule of law and have their rights to work and to fair trial reinstated as ordered by the court. Instead, they are currently at the mercy of the government’s arbitrary measures.

In the Tunis Administrative Tribunal’s ruling on the cases of the 49 judges and prosecutors on 10 August, the tribunal found that the government had “made the contested decision without informing the judges of the allegations against them, which is a serious breach of defence rights, the presumption of innocence and fair trial guarantees set forth in the Tunisian constitution and laws.” The tribunal further stated that the dismissal amounts to a “Damocles sword for judges, undermines the independence of the judiciary …and seriously violates their reputation and right to work….”

Among the 49 judges and prosecutors, whose dismissal was suspended by the administrative tribunal, are Hamadi Rahmani, magistrate counselor at the Court of Cassation; Mohamed Taher Kanzari, juvenile affairs judge in the Court of Siliana; and Ramzi Bahria, assistant prosecutor in the Mahdia First Instance Tribunal. On 22 June, the three went on hunger strike (Hamadi Rahmani and Ramzi Bahria for 15 days and Mohamed Taher Kanzari for 36 days) to protest their arbitrary dismissal. They told Amnesty International that the Ministry of Justice had not at any point informed them of the grounds for their dismissal and they had not had access to review any official document or evidence against them or challenge it. All three said they were shocked when they heard the news of their dismissal which they learned through social media or colleagues. The authorities did not provide them with a written reasoned decision, access to their disciplinary or judicial files to review any evidence against them, or a means of appeal the denial of these rights. The dismissed judges and prosecutors have been denied their right to work, and have been without their salaries, and medical coverage for over three months.

I therefore urge you to immediately reinstate the judges and prosecutors arbitrarily dismissed as their revocation is an assault on the independence of the judiciary.