Six political activists have been arrested in Jakarta, Indonesia after peacefully campaigning for the right to self-determination of Papua. Charged with “rebellion” (makar), the six Papuan activists are prisoners of conscience and should be immediately and unconditionally released. 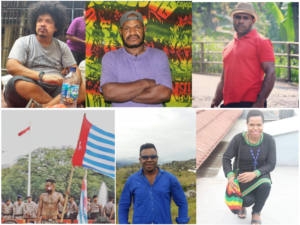 I write to express my concern regarding the six Papuan activists Dano (Anes) Tabuni, Charles Kosal, Ambrosius Mulait, Isay Wenda, Arina Lokbere, and Surya Anta Ginting, who were all arrested over the days of 30 and 31 August by the Jakarta Regional Police Force. They have all been detained and charged with “rebellion” (makar) under Articles 106 and 110 of the Criminal Code.

Currently detained at the Police Mobile Brigade Headquarters (Mako Brimob) in Depok, Amnesty International considers the six activists to be prisoners of conscience as they have been detained solely for peacefully exercising their human rights to freedom of expression and assembly by peacefully campaigning for the right to self-determination of Papua.

While their lawyers could meet the activists, they were not allowed to be present in the room during the police interrogation of their clients. In addition to not being able to hear what was being said, the lawyers have complained that the observation window was heavily tinted which obstructed their view of what was happening inside.

I urge you to immediately and unconditionally release the six Papuan political activists and drop all the charges against them as they are prisoners of conscience detained solely for expression peacefully exercising their rights to freedom of expression and freedom of assembly; and pending their release, ensure that they are protected from torture and other ill-treatment and have regular access to their family members, access of medical care, and lawyers of their choice. They must be assisted by their lawyers in all stages of the legal process, in line with the right to a fair trial. I also urge you to counsel the President to ensure that Article 106 and 110 of the Criminal Code are repealed or amended to ensure they comply fully with Indonesia’s obligations under international human rights law.