Dawud Ibsa, the chairman of the Oromo Liberation Front, an Ethiopian oppositional political party, has been placed under house arrest in his home in Addis Ababa, the Ethiopian capital, since May 3, 2021. This was done after the police conducted an illegal search of his home and seized electronic equipment. The police have not allowed anyone to leave or enter the compound of Dawud Ibsa’s residence since they placed him on house arrest and there is now serious concern over Dawud Ibsa’s wellbeing as he may have run out or is close to running out of food and other essential items. The authorities have yet to present Dawud Ibsa with any charges. He must be immediately released. 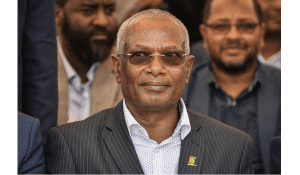 I am writing to express concern about the arbitrary arrest of Dawud Ibsa, a politician and chairman of the Oromo Liberation Front (OLF), an Ethiopian oppositional political party. On May 3, 2021 the Federal police placed Dawud Ibsa under house arrest without bringing any charges against him. This was done after the police unlawfully searched and seized the electronic equipment in his house, including laptop computers and mobile phones, without presenting a search or seizure warrant. The police have not allowed anyone to leave or enter the compound of Dawud Ibsa’s residence in Addis Ababa, in the capital, since they placed him on house arrest on May 3, 2021. There is therefore serious concern over Dawud Ibsa’s wellbeing as the food and other essential items in the house have either ran out or are close to doing so.

Dawud Ibsa’s detention did not happen in a vacuum. According to the OLF spokesperson, the party had to withdraw from the general election originally scheduled for June 21, 2021 because of the arbitrary detention of many of its leaders and members and the authorities’ closure of their offices in Addis Abba and other parts of the country.

From the start of his house arrest, the authorities have failed to present Dawud Ibsa with an arrest warrant or court order. Nor have they informed him of the reason for his arrest. His prolonged house arrest amounts to arbitrary detention, and it imposes arbitrary restrictions on his rights to freedom of movement and association. I am further concerned that Dawud Ibsa is being detained solely in connection to his opposition to the government and political affiliations. The authorities must respect, protect, promote and fulfil the rights to freedom of expression and association, in accordance with Ethiopia’s international human rights obligations.

In light of the above, I urge you to immediately release Dawud Ibsa from house arrest, or, if there is sufficient evidence of wrongdoing, promptly charge him with a recognisable offence, in accordance with international standards. Pending release or charge, I urge you to ensure he has access to food and other essential items.