Mohamed Rusthum Mujuthaba, 39, a Maldivian religious freedom and human rights activist, faces five months in prison, if convicted, on charges of blasphemy. Accused of posting blasphemous contents on social media, he was detained for more than six months without trial under the Maldives’ Penal Code, in violation of international human rights law. The Maldivian authorities must immediately drop the charges against Mohamed Rusthum Mujuthaba. 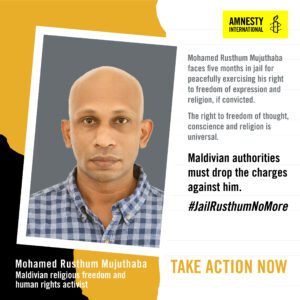 I write to you with grave concern about the fate of Mohamed Rusthum Mujuthaba, a Maldivian religious freedom and human rights activist, who is being prosecuted for blasphemy and possession of “obscene material” under the country’s Penal Code and if convicted, could face up to five months in prison.

On May 11, 2022, Mohamed Rusthum Mujuthaba told the criminal court, where he is being prosecuted, that he was detained for six months, in excess of the sentence stipulated if convicted. However, the state prosecutor argued at the court that he was detained for 29 days, 22 hours and 19 minutes. The reduced time argued by the state means that he could be imprisoned again.

Accused of posting content critical about religion on social media, he was subjected to pretrial detention between September 10, 2019, and March 12, 2020.

I wish to remind you that blasphemy laws are incompatible with international human rights law including the International Covenant on Civil and Political Rights, to which the Maldives is a state party. Mohamed Rusthum Mujuthaba is being punished solely for peacefully exercising his right to freedom of expression, which includes criticism of religious leaders or commentary on religious doctrine and tenets of faith.

I, therefore, urge you to: