Iran’s prosecution authorities and security and intelligence agents in West Azerbaijan Province have forcibly disappeared an Iranian Kurdish dissident, Edris Feqhi, since July 2021. He remains at risk of torture and other ill-treatment. 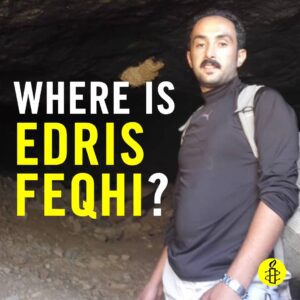 Prosecution authorities and intelligence and security agents in West Azerbaijan province have forcibly disappeared Edris Feqhi, a 36-year-old dissident from Iran’s oppressed Kurdish minority, since July 2021. On July 27, 2021, Revolutionary Guards announced an armed ambush on members of the Kurdistan Free Life Party (PJAK), a Kurdish opposition group, in Boukan, West Azerbaijan province. Edris Feqhi was subsequently identified as one of the men fired upon. His family initially thought that he had died based on state media reports. However, in August 2021, eyewitnesses informed the family that he was injured and arrested shortly after escaping the initial site of the shooting in Elm Abad village. Between September and November 2021, two former detainees reported to the Kurdistan Human Rights Network (KHRN) having seen him alive in a Revolutionary Guards detention centre in Almahdi barracks in Urumieh, West Azerbaijan province. They said he was in dire health due to torture and lack of medical care.

After strenuous efforts by Edris Feqhi’s family, an official at the Prosecutor’s Office in Urumieh verbally confirmed his detention on September 29, 2021, but refused to disclose his whereabouts and said he will call his family once the investigation stage ends. However, in November 2021, a senior official at Branch 6 of the Prosecutor’s Office in Urumieh denied this information. Over the past year, officials at Almahdi barracks have generally told the family that they cannot provide any information but sometimes advised the family to seek written authorization for a family visit from the Intelligence Organization of the Revolutionary Guards, indicating that Edris Feqhi is in their custody. At the public relations office of the Intelligence Organization of the Revolutionary Guards in Urumieh, officials have on occasion said that Edris Feqhi will call his family “upon the completion of administrative processes”. At other times, they have said he is dead, provided contradictory accounts about the circumstances surrounding his supposed death and burial, or claimed that a death certificate will soon be issued. In late July 2022, the Ministry of Intelligence (MOI) summoned Edris Feqhi’s mother after she posted a video online asking human rights groups for support. MOI agents first said that Edris Feqhi had died but then suggested that he was undergoing criminal proceedings and the family should hire a lawyer. The same month, a MOI agent informally told a source interviewed by KHRN that Edris Feqhi had been moved to a MOI detention centre in Urumieh.

I urge you to immediately disclose Edris Feqhi’s fate and whereabouts and release him if he is in state custody unless there is sufficient evidence not obtained through torture or other ill-treatment to charge him with a recognizable criminal offence, respect his fair trial rights and do not seek to impose the death penalty. In the meantime, I urge you to protect him from torture and other ill-treatment, and grant him regular access to his family, a lawyer of his choosing and adequate medical care. I also ask you to order a thorough, independent and impartial investigation into the circumstances surrounding this enforced disappearance and the allegations of torture and other ill-treatment in order to bring to justice those reasonably suspected of criminal responsibility in fair trials without recourse to the death penalty.