Police evacuated at least 23 members of the Ahmadiyya religious minority in East Lombok to another town after neighbouring villagers destroyed their homes and possessions. Repeatedly attacked over a period of 24 hours, the community continues to face on-going intimidation and threats of damage to their property. 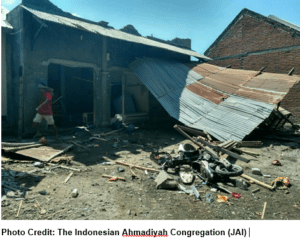 At least 23 individuals from the Ahmadiyya religious minority in Gereneng village, in West Nusa Tenggara Province were evacuated by the East Lombok Police following an attack by dozens people from the same village on 19 May 2018. Starting at 11am local time, the mob destroyed at least six houses, four motorcycles, a local store and household equipment belonging to the members of the Ahmadiyya community. According to one of the victims, the mob also took her family’s jewelry and money. Victims of the attack, mostly women and children, have not yet been able to return to their homes.

2) LET US KNOW YOU TOOK ACTION
Click here to let us know if you took action on this case! This is Urgent Action 104.18
Here’s why it is so important to report your actions: we record the actions taken on each case—letters, emails, calls and tweets—and use that information in our advocacy.