On December 31, 2021, men in civilian clothing arrested former Justice Minister Noureddine Bhiri and Fathi Beldi, a former Interior Ministry employee, in Tunis and took them to undisclosed locations. Noureddine Bhiri is also the vice president of Ennahda which was the majority party in parliament until President Kais Saied suspended it in July 2021; he is the most senior Ennahda official to be arrested since that move. Neither men have been formally charged. Nor have they had any access to their lawyers or been granted the opportunity to challenge their detention before a judicial authority. They must be immediately released. 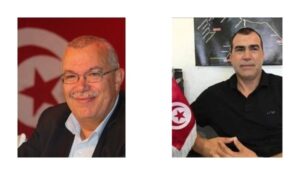 I write to you to ask you to grant the immediate release of Noureddine Bhiri, a former Justice Minister, and former government official Fathi Beldi, both of whom have been held arbitrarily since December 31, 2021. Their detention circumvents the judicial process and is in violation of their rights to liberty and due process.

Around 8:15 am on December 31, 2021, Noureddine Bhiri and his wife, both lawyers, left their house in the district of Manar 1, in Tunis, and got into their car to drive to the office they share when four cars pulled up and trapped their car in the street. Around ten men in civilian clothing got out of the four cars, struck Noureddine Bhiri and his wife on the head and ordered Noureddine Bhiri to go with them. The men refused to identify themselves and did not present an arrest warrant. Noureddine Bhiri was detained incommunicado at an undisclosed location until January 2, 2022, when his family and lawyers learned that he had been transferred to the Bougatfa hospital in Bizerte, a town in northern Tunisia, where he remains held. Authorities have since allowed Noureddine Bhiri’s family to visit him in hospital but have continued to refuse his lawyers access to him, in violation of his due process rights.

Around 10:30 am on December 31, 2021, Fathi Beldi was driving his car out of his garage in Ariana, Tunis, when several cars pulled up and men in civilian clothes got out and arrested him without showing an arrest warrant. The men also confiscated his car. Later that day, National Guard officers in Borj El Amri, a city 30 km from Tunis, called his family to inform them of the arrest, but refused to disclose his whereabouts, detaining him incommunicado without access to his family and lawyers. On January 5, 2022, National Guard officers brought Fathi Beldi from his place of detention to the Borj El Amri police station, where they allowed him to meet with his family. However, they monitored the meeting and did not allow them to discuss Fathi Beldi’s place of detention. Throughout his detention, officers have denied him access to his lawyers. To date, neither of the two men’s lawyers have found any evidence that their detention is the result of a judicial order. Without access to their lawyers or a judicial authority, neither Noureddine Bhiri nor Fathi Beldi have been granted their right to challenge their detention or be promptly informed of charges against them, both core fair trial rights.