Shahnewaz Chowdhury, a Bangladeshi engineer and activist, could face up to 10 years in prison for sharing his personal opinion on Facebook. Expressing his belief that a coal-fired power plant in his hometown was environmentally destructive and criticising incidents that allegedly led to the killing of 12 people during protests in the plant, he called on the youth to ‘resist injustice and support development through fearless writing’. He has been detained under the Digital Security Act, a draconian law, that is increasingly being used in Bangladesh to silence dissent. The authorities must drop the case against Shahnewaz Chowdhury and immediately and unconditionally release him and all those accused solely for exercising their right to freedom of expression. 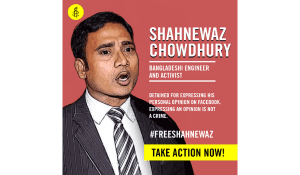 I write to you with grave concern about Shahnewaz Chowdhury, an engineer and activist, who was arrested at midnight from his Gandamara residence in Banshkhali on May 28, 2021, solely for sharing his opinion on Facebook.

In the Facebook post, Shahnewaz Chowdhury expressed his opinion that a coal-fired power plant in Banshkhali was environmentally destructive and criticised the incidents that allegedly led to the killing of 12 people during protests in the plant. Believing that the power plant has not contributed to the development that people expected, he encouraged the youth to resist injustice and support development through fearless writing.

For this, he has been accused of posting “false and offensive information”, “tarnishing the reputation of the power plant” and “creating animosity, instability and chaos” under sections 25, 29 and 31 of the draconian Digital Security Act (DSA). He could face up to 10 years in prison, if convicted.

The DSA is being used by the authorities to target critical voices and silence dissent. Shahnewaz Chowdhury is being punished simply for sharing his personal opinion online. Expressing an opinion is not a crime. His arrest is a clear violation of the right to freedom of expression under international human rights law including the International Covenant on Civil and Political Rights, to which Bangladesh is a state party.

I urge your government to: