Activists Oumar Sylla, Ibrahima Diallo and Saïkou Yaya Barry were arrested by the Guinean authorities on 30 July, solely for peacefully exercising their rights to freedom of expression and assembly. Oumar Sylla and Ibrahima Diallo are still detained at Conakry prison, waiting for their trial after they called for a protest on 28 July. On 12 October, Saïkou Yaya Barry was provisionally released under judicial control and evacuated to Tunis after his health deteriorated during his detention. The Guinean authorities must drop all charges and immediately and unconditionally release Oumar Sylla and Ibrahima Diallo. 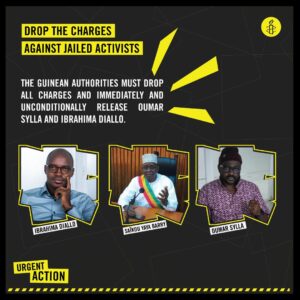 I am writing to raise concern for three activists, Oumar Sylla, Ibrahima Diallo and Saïkou Yaya Barry, who are being prosecuted solely for the peaceful exercise of their rights to freedom of expression and assembly.

Despite a national blanket ban on all protest “likely to disturb social peace”, on 28 July the National Front for the Defence of the Constitution (FNDC) organized a protest to denounce the unilateral way in which the political transition following the September 2021 coup was being managed by the authorities. Violence broke out between defence and security forces and protestors. According to the authorities, five people died and several more were arrested. On 29 July, legal proceedings were launched against FNDC leaders Oumar Sylla and Ibrahima Diallo, and Saïkou Yaya Barry, the secretary general of the Union of Republican Forces party which helped the mobilization effort for the 28 July protest, for “illegal protest, destruction of public and private buildings, incitement of a crowd, assault and battery, looting and arson, obstruction of freedom of movement and complicity”. On 30 July, the three were arrested. On 12 October, Saïkou Yaya Barry was released under judicial control following the deterioration of his health during his detention and evacuated to Tunis to seek medical treatment. Oumar Sylla and Ibrahima Diallo were also unwell and evacuated to Ignace Deen Hospital in Conakry for medical treatment respectively in August and September.

On 7 November, Ibrahima Diallo and Oumar Sylla started a hunger strike in protest of their detention and demanding that their fair trial – a date for which has yet to be set – be expedited. The same day, the prosecutor of the Tribunal of Dixinn in Conakry took an “order of partial dismissal of charge and referral to the criminal court”. The charges against the 3 activists were subsequently changed to ‘’participation in an illegal protest, complicity in the destruction of public and private property, complicity in assault and battery’’. On 15 November, Ibrahima Diallo and Oumar Sylla suspended their hunger strike.

Amnesty International recalls that Guineans have the right to express their opinions including through peaceful protests as per the international human rights obligations and commitments of the country. The UN Office of the High Commissioner for Human Rights stated on 30 May 2022 that the ban of demonstrations laid down by the authorities was violating Guinea’s human rights obligations.

I urge you to ensure that all charges are immediately dropped, and Oumar Sylla and Ibrahima Diallo released.

In the meantime, I urge you to ensure their access to prompt and regular medical care as necessary.