Margarita Yudina was seriously injured by a police officer in front of cameras on 23 January during a peaceful protest in St. Petersburg in support of Aleksei Navalny. Instead of investigating, the authorities issued apologies and sought to prevent her complaining formally. They sent child protection services to check on her daughter and signalled that her sons could face military conscription. The authorities must stop harassment of Margarita Yudina and her family and bring her assailant to justice. 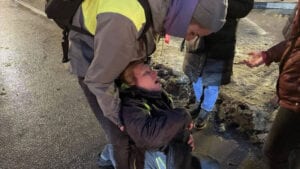 I am writing to express my outrage about the violent attack by a police officer against Margarita Yudina during a peaceful protest in St. Petersburg on 23 January. As seen in a widely circulated video, Margarita Yudina peacefully approached two police officers and asked them why they had just arrested a protester. In response, one of the officers kicked her in the stomach. Margarita Yudina fell on the ground injuring her head and had to be hospitalized in the intensive care unit. While still recovering from her injury at the hospital, she was visited by a TV crew and a police officer who issued an apology to her on camera.

After Margarita Yudina indicated her intention to file a formal complaint about the incident and insist on a formal investigation, officials from the Prosecutor’s Office and child protection services unexpectedly visited her home. The visit caused her deep distress and she had to be briefly hospitalized again. On 28 January, the head of the local administration was quoted in the media saying that child protection services “had questions” regarding the living conditions of Margarita Yudina’s 15-year-old daughter (this typically implies that the authorities might seek custody of the child). The official also hinted that Margarita Yudina’s two older sons should be considered for military conscription. There can be little, if any, doubt that Margarita Yudina and her family are facing harassment and intimidation to dissuade her from seeking justice for the police assault.

I urge you to initiate a prompt, effective and impartial investigation into the attack against Margarita Yudina and ensure that she and her family are not subjected to further harassment and intimidation.