Activists Larry Emmanuel, Anene Victor Udoka, Samuel Gabriel, Henry Nwodo, and Ben Mannaseh are being arbitrarily detained in connection to their peaceful activism. On July 4, 2021 they attended a church service at the Dunamis International Gospel Center in Abuja, the Nigerian capital, when they were arrested and beaten by the Center’s security unit for wearing #BuhariMustGo T-shirts. In detention, they have been denied access to their lawyers and family and are at risk of torture and other ill-treatment. Nigerian authorities must immediately and unconditionally release them, in accordance with a court order. 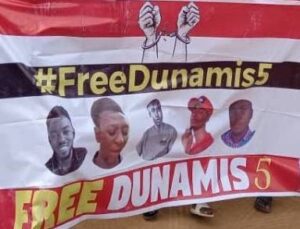 I am writing in concern for Larry Emmanuel, Anene Victor Udoka, Samuel Gabriel, Henry Nwodo, and Ben Mannaseh, five young activists arbitrarily detained at the facility of the Department for State Services (DSS) in Abuja, the Nigerian capital, in connection to their peaceful activism.

On July 4, 2021 the five activists were attending a Sunday church service when the security guards at Dunamis International Gospel Center, Abuja, arrested them for wearing #BuhariMustGo branded T-shirts. The shirts were in reference to President Buhari and were worn by the activists in protest against bad governance in Nigeria. The security unit handed them over to officials of the DSS who have since held them in custody. They have been denied any access to their family and lawyers and have not been charged with any offence. On July 26, 2021 the Federal High Court ordered their release after their lawyer filed a suit in court to demand that their fundamental rights be respected.

Earlier this year, in April 2021, Larry Emmanuel and Anene Victor Udoka were beaten and jailed in Kogi state for peacefully protesting, holding placards and distributing posters. They were released on June 18, 2021 after spending 72 days in prison. They are facing trial on trumped-up charges of “disturbance of public peace” for their April protests. Their trial resumes on August 3, 2021.

I have serious concerns about the arbitrary detention and ongoing trial of these five activists, who are being held simply for exercising their rights to freedom of expression and peaceful assembly. Freedom of expression is a human right and no one should ever be detained solely for expressing dissenting opinions.

I therefore urge you to immediately and unconditionally release Larry Emmanuel, Anene Victor Udoka, Samuel Gabriel, Henry Nwodo, and Ben Mannaseh as ordered by the court and drop the baseless charges against Emmanuel Larry and Anene Victor Udoka.