On 29 December 2020, Moroccan academic and human rights defender Maati Monjib was arrested while having lunch at a restaurant in the capital Rabat and has been held in arbitrary detention since then. He had been under investigation since 7 October 2020 on accusations of money laundering against him and members of his family. The investigation is the latest attempt to intimidate Maati Monjib and retaliate against him for his critical stance towards the authorities and his work promoting the right to freedom of expression in Morocco following years of harassment and unlawful surveillance. Maati Monjib is a prisoner of conscience. He must be immediately and unconditionally released. 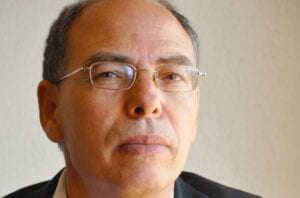 I am writing to urgently condemn the authorities’ arrest and arbitrary detention of academic and human rights defender Maati Monjib on 29 December 2020. Security agents in civilian clothes took him by force—and without prior notification—from a restaurant in the capital Rabat to the court of First Instance, where he was brought before the prosecutor. The latter referred him to the investigating judge, who, after interrogating him without a lawyer, ordered his pretrial detention.

On 7 October 2020, the prosecutor’s office at the Rabat Court of First Instance, following a referral from the Financial Information Processing Unit, opened a new investigation against Maati Monjib for alleged embezzlement and money laundering apparently stemming from the receipt of foreign funds to conduct training workshops for citizen journalists. Maati Monjib told Amnesty International that this renewed harassment and intimidation are due to a recent radio interview where he criticized the General Directorate of Territorial Surveillance (DGST, internal intelligence) for their repression of political opponents as well as his open support of detained journalists Omar Radi and Suleiman Raissouni. The Central Bureau of Judicial Investigation (better known as BNPJ) has summoned Maati Monjib more than seven times for interrogation in Casablanca and in Rabat. Four members of his family, with no relation to political activism, were also summoned, including his 70-year-old sister who has Alzheimer’s and had to travel to Casablanca, hours away from her home, to be interrogated for more than four hours. Maati Monjib denies all accusations against him.

I ask you to release Maati Monjib, as he is a prisoner of conscience solely detained for peacefully exercising his rights to freedom of expression and association. I urge you to close the open investigations and drop charges against him. I also urge you to recognize the legitimacy of human rights defenders and support their work, acknowledging their contribution to the advancement of human rights and to end the criminalization of foreign funds to pursue their human rights work.