Rivers State authorities have forcibly evicted thousands of residents of waterfront communities from their homes in the Diobu area of Port Harcourt, Rivers State, in southern Nigeria. The area is home to an estimated population of 60,000 people. The Governor must halt any plans for further demolitions and urgently provide relief and ensure access to justice and effective remedies for all those already affected. 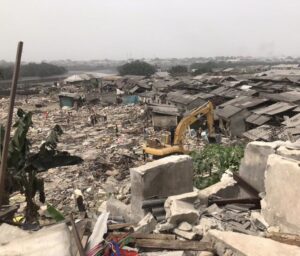 I am writing regarding the deeply concerning mass forced evictions in the Diobu axis of Port Harcourt, Rivers State, Nigeria, which have left thousands homeless in 10 communities namely: Elechi Phase 1, Urualla, Ojike, Akwuzu, Afikpo, Abba, Akowka, Nanka, Egede and Soku. When the evictions started on January 29, 2022, 2,000 people in Elechi Phase 1 were rendered homeless while their properties and livelihoods were destroyed. By February 3, 2022, the authorities had expanded the demolitions to the other nine waterfront communities. The ten communities are home to an estimated 60,000 people.

On January 19, 2022, a Rivers State Government Task Force visited several waterfront communities in Port Harcourt and marked homes for demolition. According to the residents, task force officials told residents to vacate their homes within 7 days, that is by January 26, 2022. On January 29, 2022, the Rivers State Task Force and security agents, including members of the Rivers State Police Command, began demolishing homes belonging to the Elechi Phase 1 waterfront community, some with excessive use of force – beating up residents and leaving many injured. The forced evictions have made thousands of women, men, and children homeless, forcing them to live in deplorable conditions without access to water and sanitation among other essential services.

The forced evictions have not only violated people’s right to adequate housing, which the Nigerian government as a state party to the International Covenant on Economic, Social and Cultural Rights, has a duty to respect, protect and fulfil, but also negatively impacted other human rights such as their rights to education and health, having left residents in a position of increased vulnerability to Covid-19. Access to adequate housing in times of a global pandemic is critical in protecting people from Covid-19, stopping its spread; and recovering from it. Furthermore, under international human rights law, evictions may only be carried out as a last resort, once all other feasible alternatives to eviction have been explored and appropriate procedural safeguards have been put in place. Governments must also ensure that no one is rendered homeless or vulnerable to the violation of other human rights as a consequence of eviction.

I urge you to immediately halt further demolitions and provide emergency relief, alternative housing, and effective redress (including adequate compensation) for all Port Harcourt residents who have already been forcibly evicted.