Responding to the draft ruling leaked to Politico that shows the Supreme Court has voted to overturn abortion rights, Amnesty International USA said: “If confirmed, it is an egregious violation of human rights to deny people access to abortion. This will force women, girls, and people who can become pregnant to carry pregnancies against their will and to seek out unsafe abortion.” We call on Congress to use all of the tools at its disposal and pass legislation with haste to ensure universal access to abortion, post-abortion care, and evidence-based, non-biased abortion-related information, free of force, coercion, violence and discrimination. 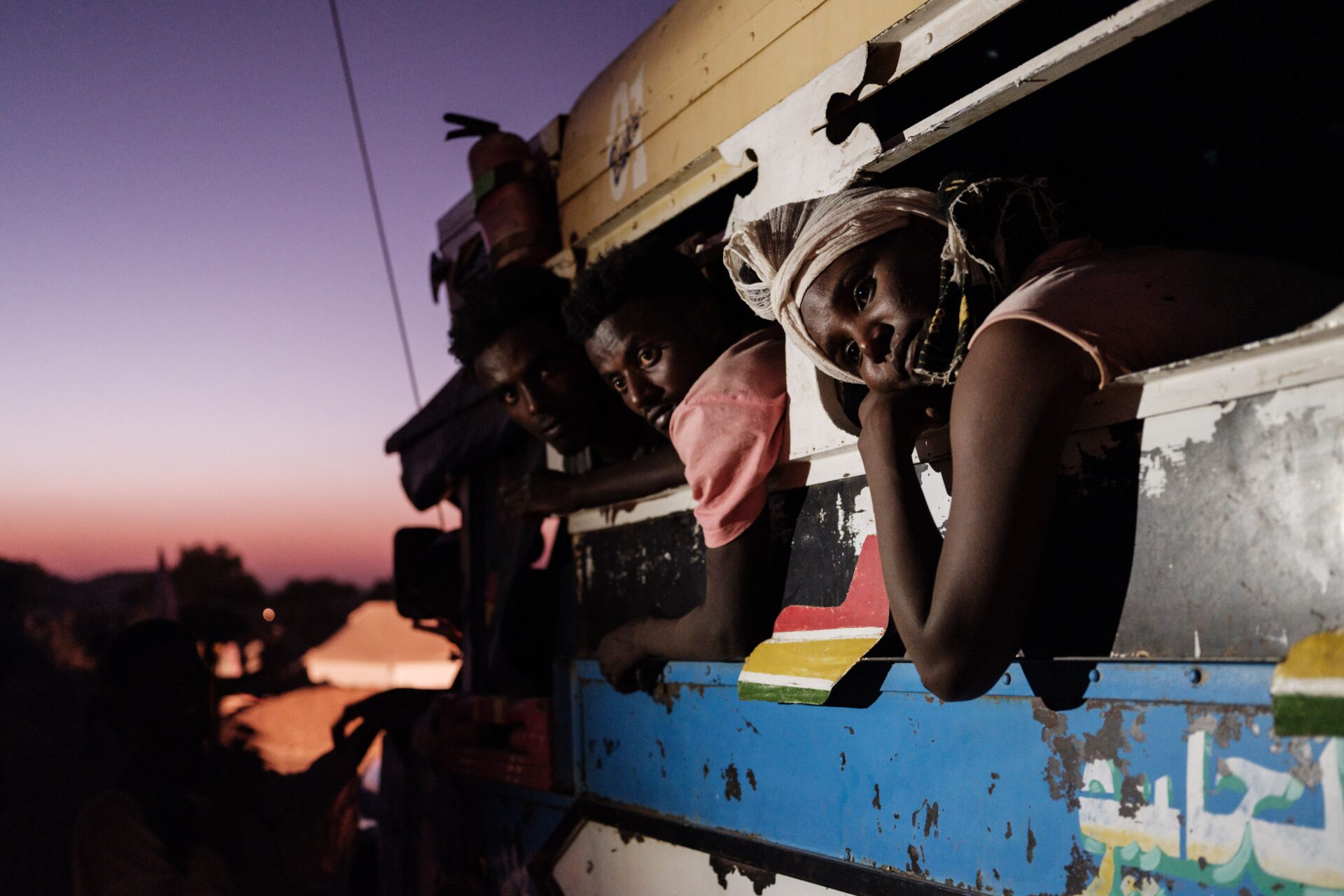 Ethiopian refugees fleeing from the Tigray conflict arrive at the entrance of Um Raquba refugee camp in Sudan’s eastern Gedaref state, on Dec. 11, 2020. (Photo by Yasuyoshi Chiba/AFP via Getty Images)

Since Nov. 2020, Amhara regional security forces and civilian authorities in Ethiopia’s Western Tigray Zone have committed widespread abuses against Tigrayans that amount to war crimes and crimes against humanity, Amnesty International and Human Rights Watch said in a joint report  released on Apr. 6. The report, ‘We Will Erase You From This Land’: Crimes Against Humanity and Ethnic Cleansing in Ethiopia’s Western Tigray Zone, draws from the testimony of more than 400 people.

The report documents how newly-appointed officials in Western Tigray and security forces from the neighboring Amhara region, with the acquiescence and possible participation of Ethiopian federal forces, systematically expelled several hundred thousand Tigrayan civilians from their homes using threats, unlawful killings, sexual violence, mass arbitrary detention, pillage, forcible transfer, and the denial of humanitarian assistance. These widespread and systematic attacks against the Tigrayan civilian population amount to crimes against humanity, as well as war crimes.

Amnesty thanks lawmakers for their efforts thus far to address the human rights crisis in Ethiopia, including pushing the Biden administration to make a public determination if genocide has occurred and calling for Temporary Protected Status (“TPS”) for Ethiopians in the U.S.

We urge the U.S. government to:

As the Russian government’s actions continue to kill large numbers of civilians and precipitate a massive humanitarian crisis in Ukraine, the Kremlin is taking steps to silence criticism at home. On Apr. 8, Russian authorities effectively shut down Amnesty International’s Moscow Office alongside the offices of Human Rights Watch and other organizations. The closure of Amnesty in Russia marks only the latest in a long list of organizations and individuals that have been punished for defending human rights and peacefully criticizing the actions of Russian authorities. On Apr. 22, Russian authorities launched a criminal investigation against prominent opposition activist Vladimir Kara-Murza simply for sharing information about the actions of the Russian military in Ukraine.

Amnesty International calls on Congress to:

Amnesty International continues to monitor human rights violations in Ukraine, where the Russian military is using conventional weapons as well as weapons banned by international law to target civilian infrastructure, resulting in major casualties. To date, Amnesty International has documented evidence of more than a dozen indiscriminate strikes in which civilians were killed. This includes attacks against a preschool in Sumy Oblast, and a breadline in Chernihiv. Amnesty has also gathered evidence from civilians living under siege in Kharkiv, Izium and Mariupol, and interviewed civilians who have witnessed extrajudicial killings near Kyiv.

A regularly updated list of Amnesty-verified attacks is available here.

We note with appreciation the U.S. government’s efforts to speak out against these abuses. Congress and the Biden administration must continue to push for accountability for the Russian military’s human rights violations, including apparent war crimes.

Amnesty remains deeply concerned over the welfare of four Uyghur individuals, including a 13-year-old girl, at high risk of deportation from Saudi Arabia to Xinjiang. We urge members of Congress to press State Department officials to work with like-minded governments and ensure Uyghurs and other at-risk groups are safe from refoulement to China. U.S. Commission on International Religious Freedom Vice Chair Nury Turkel’s public demands for action in the case of Waili and Ruze demonstrate steps in the right direction, but a more robust international approach is urgently needed.

Myanmar is in the middle of a humanitarian collapse while the international community, including the U.S., fails to deliver meaningful support to people on the ground. Amnesty International supports the congressional call for the Biden administration to nominate a U.S. ambassador to ASEAN as soon as possible.

Ahead of the Mar. 31 House Foreign Affairs Subcommittee hearing on COVID-19 in Sub-Saharan Africa, Amnesty International USA and partners sent a letter committee leaders highlighting ongoing risks to people in Sub-Saharan Africa. Only 13 percent of Africans are fully vaccinated against COVID-19 while 18 countries have vaccinated less than 10 percent of their population. Amnesty calls on Congress to help expand global vaccine production and access, including by pressing the Biden administration to secure a full World Trade Organization TRIPS wavier for COVID-19 vaccines, tests, and treatments.

Gun violence in America continues to be a public health crisis that has no boundaries. Amnesty applauds President Biden for proposing $500 million in the 2023 budget for Community Violence Intervention (“CVI”) programs. In our Apr. 25 letter to appropriators, Amnesty and the Invest In Us requested an allocation of $750 million for CVI programs. Expanding the federal investment in CVI initiatives is critical to the lifesaving work being done in communities through evidence-based strategies to reduce gun violence.

Firearms are now the leading cause of death for children and teens in the United States. Congress must pass Ethan’s Law (H.R.748) to keep our children safe, and the Break the Cycle of Violence Act (H.R.4118, S.2275) to provide long-term funding for Heroes across the country doing violence prevention work.

AMNESTY CALLS ON THE U.S. GOVERNMENT TO DO MORE TO PROTECT PEOPLE SEEKING SAFETY

As the Biden administration prepares to implement a comprehensive, whole-of-government plan to wind down Title 42, Amnesty and the Leadership Conference urge Members of Congress to reject all legislative efforts to extend Title 42 beyond May 23. Using Title 42 to prevent people fleeing persecution from applying for asylum is a perverse misuse of public health law, and efforts to tie the policy with COVID-19 funding will harm immigrants. Lawmakers should not align themselves with a policy like Title 42 that subverts U.S. and international law and punishes Black, Brown, Indigenous, and LGBT people in search of safety.

While we welcome the cuts in President Biden’s FY23 budget request that reduce immigration detention beds, we are concerned with the administration’s request for increased funding for so-called “alternatives to detention,” which are dangerous e-carceration and surveillance programs that still harm, criminalize, and restrict people seeking safety. We call on Congress to build on the cuts indicated in President Biden’s budget proposal and boldly reduce Department of Homeland Security funding for enforcement in FY23.

On May 18, Amnesty International USA activists across the country will meet virtually with their Members of Congress and ask them to fund community-led solutions to end gun violence and pass an Afghan Adjustment Act to provide a roadmap to permanent status for Afghans currently in the U.S.