Save Alaa Abd el-Fattah’s life. Tell Egypt He Must Be released [UPDATED] 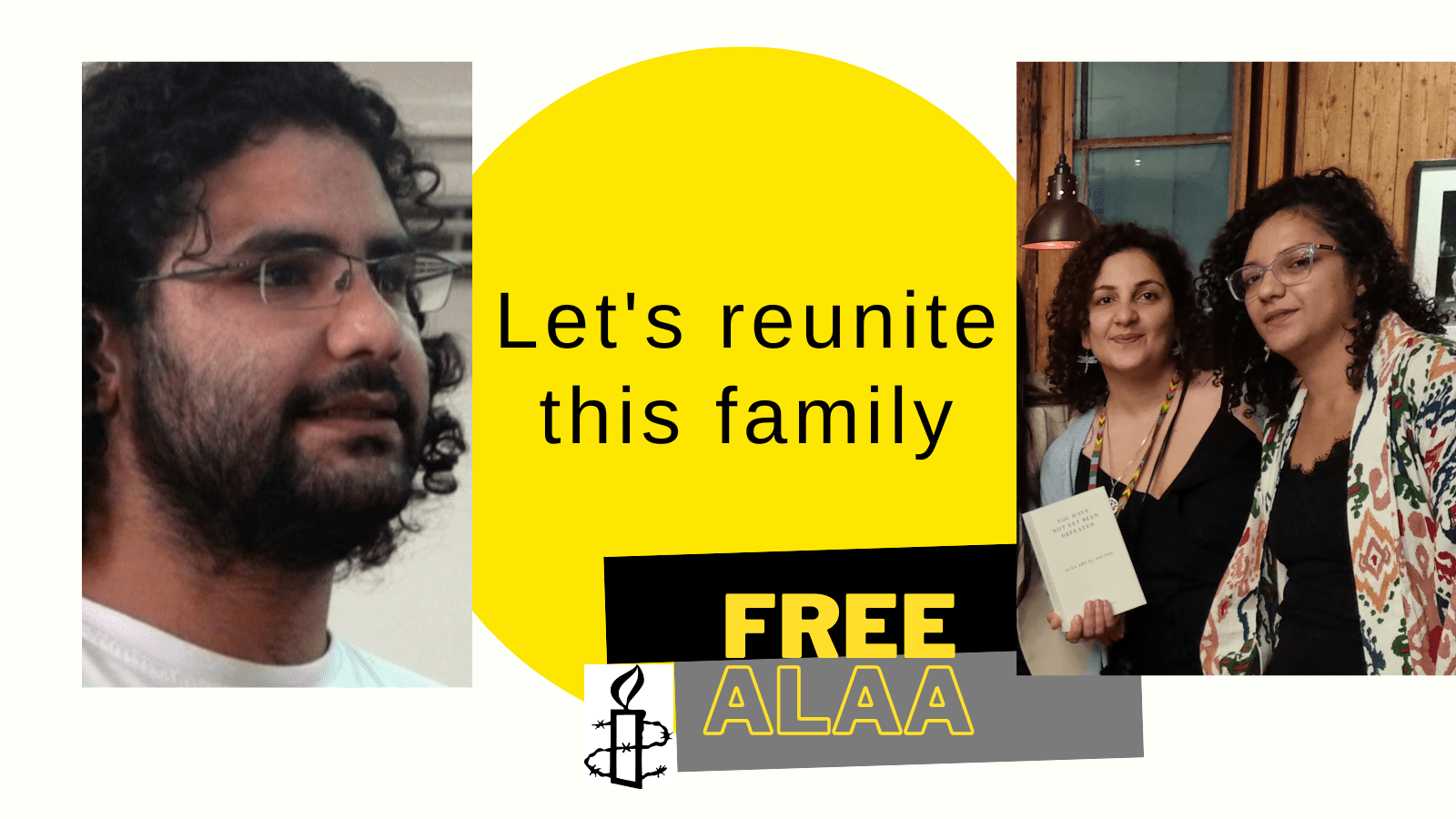 The Egyptian activist, whose family has played important role in every fight for human rights in Egypt for more than four decades, has ended his hunger strike in prison after being able to meet with family members. Amnesty International continues to fight for his release. He has endured more than 1,000 days in unjust detention for his human rights activities. Prison and security officials have subjected him to a catalogue of human rights violations including torture and other ill-treatment, in reprisal for his prominent role in the 2011 revolution.

The climate conference depends on the ability of civil society actors to freely be heard. With Egypt’s record of muzzling civil society and using a Protest Law dating back to the British colonial period to essentially criminalize all public demonstrations, this will not happen. Already news reports confirmed by human rights groups have reported hundreds of detention of Egyptians in advance of the conference. Amnesty International has joined an international coalition of human rights and environmental groups to call for #FreeThemAll during the COP27 conference.

Why a White Out?

We are calling on people to do a “White Out” action to show solidarity with Egypt’s political prisoners. White is the color worn by Egyptian prisoners in jail. Wearing white is an act of solidarity that will not detract from other messages delivered at COP27.

Authorities in Egypt have shown no genuine will to acknowledge, let alone address, the country’s deep-rooted human rights crisis despite launching a National Human Rights Strategy one year ago. Instead, they have continued to stifle freedoms and commit crimes under international law in the lead up to the United Nations Climate Change Conference (COP27).

In a new report “Disconnected from Reality”: Egypt’s National Human Rights Strategy covers up human rights crisis, Amnesty International presents a detailed analysis of the strategy in light of the human rights situation on the ground, revealing how authorities have used it as a propaganda tool to conceal ever growing repression of any form of dissent ahead of COP27 in November 2022.

Read the full report on the Amnesty International website.

Dozens were convicted after grossly unfair trials or were tried by emergency courts on charges stemming from the peaceful exercise of their human rights. Enforced disappearances and torture continued unabated. Conditions of detention remained cruel and inhuman, and prisoners were denied adequate healthcare, which led or contributed to at least 56 deaths in custody. Death sentences were handed down after grossly unfair trials and executions were carried out, including for drug offenses.

Authorities failed to adequately investigate or punish sexual and gender-based violence, and introduced legislation further undermining women’s rights and autonomy. LGBTI individuals were arrested, prosecuted and sentenced to long prison terms on the basis of their sexual orientation or gender identity. Authorities clamped down on labour strikes, independent unions and workers expressing grievances or criticism. The Covid-19 vaccine roll-out was marred by delays in vaccinating those most at risk, among other things. Residents of informal settlements were forcibly evicted and detained for protesting.

Authorities discriminated against Christians in law and practice, and prosecuted members of religious minorities and those espousing religious opinions not sanctioned by the state. Refugees and migrants were arbitrarily detained indefinitely for crossing borders irregularly, and forcibly expelled without due process or access to asylum procedures.

Read the full report on the Amnesty International website.

Human rights in the Middle East and North Africa: A review of 2018

Egypt: The use of indefinite solitary confinement against prisoners amounts to torture

“The first time I saw Hisham after his arrest was in hospital. He described his solitary cell to me. He could not see anything in the darkness of the cell. …

Egypt: Officially, you do not exist: Disappeared and tortured in the name of counter-terrorism

Egypt’s National Security Agency (NSA) is abducting, torturing and forcibly disappearing people in an effort to intimidate opponents and wipe out peaceful dissent, said Amnesty International in a damning new report published today which highlights an unprecedented spike in enforced disappearances since early 2015.

Amnesty International State of the World 2015-2016

International protection of human rights is in danger of unravelling as short-term national self-interest and draconian security crackdowns have led to a wholesale assault on basic freedoms and rights, warned Amnesty International as it launched its annual assessment of human rights around the world. “Your rights are in jeopardy: they are being treated with utter contempt by many governments around the world,” said Salil Shetty, Secretary General of Amnesty International.

A continuing onslaught against young activists by the Egyptian authorities is a blatant attempt to crush the spirit of the country’s bravest and brightest young minds, and nip in the bud any future threat to their rule, said Amnesty International in a new briefing.

This has been a devastating year for those seeking to stand up for human rights and for those caught up in the suffering of war zones. Governments pay lip service to the importance of protecting civilians. And yet the world's politicians have miserably failed to protect those in greatest need. Amnesty International believes that this can and must finally change.

“Circles of hell:” Domestic, Public and State Violence Against Women in Egypt

Despite some recent piecemeal reforms, shortfalls in Egyptian laws and entrenched impunity continue to foster a culture of routine sexual and gender-based violence in the country.

‘How long are we going to live in this injustice?’: Egypt’s Christians caught between sectarian attacks and state inaction

‘We Cannot Live Here Anymore’ Refugees from Syria in Egypt

This report focuses on the arrest, detention and deportation of refugees from Syria in Egypt, particularly following recent incidents in which boats leaving for Europe have been intercepted by the Egyptian authorities off the Egyptian Mediterranean coast.