On 28 February 2019, Palestinian lawmaker and prominent political figure Khalida Jarrar was released from HaSharon prison in central Israel. She had spent 20 months in administrative detention without charge or trial. 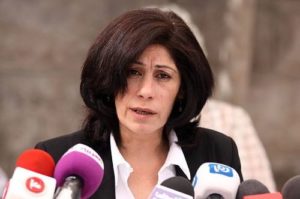 On 28 February 2019, Palestinian lawmaker and prominent political figure Khalida Jarrar was released from HaSharon prison in central Israel, after spending 606 days in detention without charge or trial.

Following her release, Khalida Jarrar thanked Amnesty International and all those who took action on her behalf: “I thank you all very much for standing up for my rights and of those of other Palestinian prisoners and detainees. While I was detained, I had no doubt that Amnesty’s members and supporters from all over the world would stand again to denounce the arbitrary administrative detention and to demand my immediate release.’’ She added: “I’m free now, but I left at least 48 female Palestinian prisoners and detainees behind Israeli prison bars, whose lives are extremely difficult and filled with misery. I hope that Amnesty could continue to campaign on cases of Palestinian prisoners in the face of injustice. The support and mobilization should continue until the release of all Palestinian political prisoners and detainees. My final message to all Amnesty supporters, is that the fight for human rights never ends and it is on us to continue these efforts.’’

On 2 July 2017, Khalida Jarrar was arrested from her home in Ramallah in the occupied West Bank. The Israeli military commander of the West Bank issued a six-month administrative detention order against her on 12 July 2017, and since then the order has been renewed three times, on 31 December 2017, 17 June, and 25 October 2018. Although six months is the maximum period of detention for each administrative detention order, each order can be renewed indefinitely under Israeli military law.

Khalida Jarrar, is a Palestinian parliamentarian and outspoken critic of the Israeli occupation of Palestinian territories as well as the security cooperation between the Palestinian and Israeli forces. For decades, Khalida Jarrar has been harassed and intimidated by the Israeli authorities for her political and human rights engagement. Israel has banned her from travelling outside the country since 1998.