Nay Zar Tun, Khin Cho Naing, and Myint Zaw have been released from prison early due to sentence reductions. Sentenced to between 12 and 18 months, they were in prison for peacefully protesting charges against Nay Zar Tun’s brother, former child soldier Aung Ko Htwe. Detained solely for expressing their human right to freedom of expression, the three activists should never have been imprisoned at all. 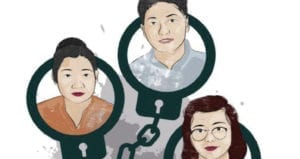 Arrested for peacefully protesting politically motivated charges against a former child soldier, Nay Zar Tun, Khin Cho Naing and Myint Zaw have all been released from prison early, following reductions to their sentences.

Nay Zar Tun was released on 9 April after receiving a sentence deduction for good behaviour in prison, a common practice in Myanmar. Myint Zaw and Khin Cho Naing, released on 17 April on 4 May respectively, also benefited from general sentence reductions as well as the latest Presidential amnesty on Myanmar New Year (17 April), which included a reduction of prison sentences for people sentenced to up to 40 years’ imprisonment by 25 per cent.

The three activists were arrested in May and June 2019 for staging a protest outside of a court building in Yangon, Myanmar’s largest city.  During the protest they called a judge “a cow without conscience” and reportedly stepped on a copy of the Constitution after the judge filed politically motivated charges against Nay Zar Tun’s brother, former child soldier Aung Ko Htwe.

On 24 December 2019, they were convicted and sentenced to one year in prison under Section 505(b) for “Incitement” and to six months in prison under Section 153 of the Penal Code for “wantonly giving provocation with intent to cause riot”. The sentences were to be served concurrently. Khin Cho Naing and Myint Zaw were convicted on a further charge for “causing destruction of the whole or any part of the Union Seal” under Section 7 of the Union Seal Law and sentenced to an additional six months in prison.

While we celebrate the release of Nay Zar Tun, Khin Cho Naing and Myint Zaw, they should have never been arrested or imprisoned in the first place.

Amnesty International remains deeply concerned about other activists in Myanmar who remain in prison solely for the peaceful exercise of their rights and urges the authorities to stop the ongoing arrests, prosecution and imprisonment of activists, human rights defenders, and journalists for exercising their rights to freedom of expression, association, and peaceful assembly.