The next hearing in the trial against 18 students and one academic from Middle East Technical University (METU) will take place on 12 March in Ankara. They are facing criminal charges that carry prison terms for allegedly joining an LGBTI Pride Parade on the University’s campus on 10 May 2019. The charges against all of them must be dropped as no one should be prosecuted for exercising their rights to freedom of expression and peaceful assembly. 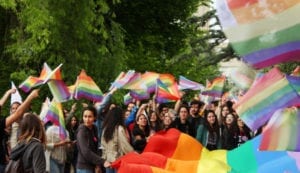 I am writing to you concerning the ongoing prosecution of 18 students and one academic from Middle East Technical University (METU) in Ankara in connection with their alleged participation in the 9th annual LGBTI Pride Parade on the University’s campus on 10 May 2019.

The METU Pride Parade on 10 May constituted a legitimate exercise of the right of students and academics to freedom of expression and peaceful assembly. Nevertheless, police officers entered the METU campus on the request of the university management to disperse the gathering and when students did not disperse, broke up the gathering with pepper spray, plastic bullets and tear gas. Several people were injured and at least 22 people were detained, including the 19 people currently facing criminal charges.

The 19 face charges under Article 32 of the Law No. 2911 on Meetings and Demonstrations and risk prison sentences for “failing to disperse despite being warned”. One of the students is also charged with “insult” under Article 125 of Turkey’s Penal Code, for allegedly “making a hand gesture considered rude” against police officers. Some of the students facing criminal charges have stated that they did not participate in the Pride Parade and were just bystanders.

I urge you to ensure that charges against the 18 METU students and the academic for their alleged participation in the Pride Parade on 10 May 2019 are dropped, as no one should be prosecuted for exercising their rights to freedom of expression and peaceful assembly; and the excessive use of force by the police on campus on 10 May is promptly, independently and impartially investigated and police officers found to have acted unlawfully are brought to justice.