On May 29, 2022, the appeal session for four Yemeni journalists sentenced to death, namely, Akram al-Walidi, Abdelkhaleq Amran, Hareth Hamid, and Tawfiq al-Mansouri, will take place before the Huthi-run Specialized Criminal Appeals Division in Sana’a, the Yemeni capital. Since their arrest in 2015, the Huthi de facto authorities have detained the journalists, holding them without charge or trial for over three years and subjecting them to various human rights abuses, including enforced disappearance, intermittent incommunicado detention and solitary confinement, beatings, and denial of access to medical care. Amnesty International calls on the Huthi de facto authorities to quash the death sentences – issued following a grossly unfair trial – and order the immediate release of the four journalists. 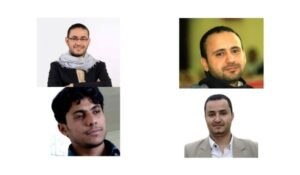 The appeal hearing regarding the case of four Yemeni journalists, Akram al-Walidi, Abdelkhaleq Amran, Hareth Hamid, and Tawfiq al-Mansouri, will be held on May 29, 2022, before the Specialized Criminal Appeals Division in Sana’a, Yemen. The Specialized Criminal Court sentenced the journalists to death in April 2020 following a grossly unfair trial; a verdict that the defendants have since been appealing.

The de facto Huthi forces raided Qasr al-Ahlam hotel in Sana’a on June 9, 2015, and arrested the four journalists. They were detained without charge until December 2018 when they were charged with a series of offences, including “spying for Saudi Arabia”, which carries the death penalty, as well as “creating several websites on the internet and on social media”; and “broadcasting rumours, fake news and statements in support of the enemy Saudi Arabia and its allies against the Republic of Yemen.” On April 11, 2020, they were sentenced to death by the Specialized Criminal Court in Sana’a following a grossly unfair trial in which their lawyer was barred from attending nearly all court sessions, and without informing their lawyers and families of the death sentence.

In October 2020, the four journalists were transferred to the Exchange House prison, in the Central Security Camp in Sana’a, expecting to be released as part of a prisoner exchange deal. Despite the Prosecutor General’s order, dated October 30, 2020, to release them, they continue to be detained and denied visits from their families and lawyers. According to his family, the authorities have barred them from bringing Tawfiq Al-Mansouri any medication despite pressing health concerns, and since 2020 he has been denied transfer to a hospital for treatment. Denial of medical treatment to the seriously ill is considered an act of cruelty amounting to torture and other ill-treatment under international law.

We urge the Huthi de facto authorities to quash the death sentences of Akram al-Walidi, Abdelkhaleq Amran, Hareth Hamid, and Tawfiq al-Mansouri and order their immediate and unconditional release. Pending their overdue release, the authorities must ensure the journalists are provided with urgent medical care and granted access to their families and lawyers.