Nine people, the majority university students, are in pre-trial detention and 27 others under house arrest in Turkey for participating in peaceful protests following the appointment of Professor Melih Bulu as rector of Istanbul’s Boğaziçi University on 1 January 2021. Those deprived of their liberty, including under house arrest, simply for exercising their right to peaceful assembly must be released immediately and unconditionally. 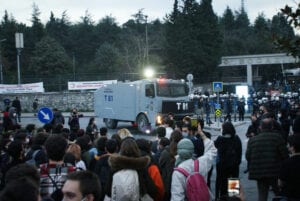 I am writing regarding the orders of pre-trial detention issued by a court in Cağlayan Courthouse, (in Istanbul’s Sisli district), of two peaceful protestors, both students at Boğaziçi University, and the orders to hold 14 others in house arrest. The two students were detained pending trial on 30 January 2021 for allegedly ‘inciting the public to enmity and hatred’ over artwork on display in an art exhibition held at the Boğaziçi University Campus.

Seven others – mostly students – were remanded in pre-trial detention by courts in the Anadolu Courthouse (in Istanbul’s Kartal district) between 5 and 8 February for their participation in peaceful protests in the Kadıköy district of Istanbul in support of the Boğaziçi University protestors. Thirteen others are under house arrest.

The decisions to deprive these people of their liberty were made because of their participation in overwhelmingly peaceful protests following the appointment of Professor Melih Bulu as rector of Boğaziçi University on 1 January 2021. According to the Minister of Interior, more than 800 protestors have been taken into police custody throughout Turkey for exercising their rights to freedom of peaceful assembly and expression since the start of the protests on 4 January. Hundreds have been subjected to judicial controls. Law enforcement officers used unnecessary and excessive force against protestors and several detainees were allegedly subjected to ill-treatment.

Amnesty International believes the unfair pre-trial detention and house arrest decisions are in violation of the Boğaziçi University protestors’ right to freedom of expression and peaceful assembly.

I urge you to drop all criminal investigations against all protestors for peacefully exercising their rights to freedom of expression and peaceful assembly; request the immediate and unconditional release of all those deprived of their liberty solely for peacefully exercising their human rights, either in pre-trial detention or house arrest; and launch prompt, thorough independent and impartial investigations into all allegations of use of unlawful force and ill-treatment and bring those responsible to justice in fair trials.