Sultana Khaya, an activist for Sahrawis’ right to self-determination and her family have been under a de facto house arrest since November 2020. Security forces surrounding their home repeatedly and violently forced Sultana Khaya and her sister Luaara back inside their house when they attempt to leave. Security forces have also broken into their homes on several occasions, physically assaulting and raping the sisters. On March 16, 2022, a group of American activists successfully accessed Sultana Khaya’s house but refrained from disclosing details of the visit for security reasons. While conditions of the house arrest were recently eased, police presence around Sultana Khaya’s house have not been completely lifted. 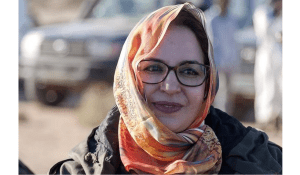 On March 16, 2022, a group of at least four American activists from ‘Unarmed Civilian Protection’ and ‘Human Rights Action Center’, two international non-profit organizations working to promote human rights and peace building worldwide, managed to visit the home of Sultana Khaya, a peaceful activist for Sawhrawi self-determination who has been arbitrarily confined to her home in Boujdour, Morocco, since November 2020.

I urge you to ensure a prompt, thorough, independent, impartial, transparent, and effective investigation into the security forces’ abusive force and attacks against her and her family, including the report of rape and sexual assault, and ensure that those suspected of responsibility are brought to justice in fair trials. I also urge you to ensure that Sultana Khaya and her family are provided with access to justice and effective remedies, including adequate compensation, and guarantee of non-repetition for the violations of human rights to which they have been subjected. I further urge you to immediately announce an end the arbitrary house arrest against Sultana Khaya and grant safe and free access to her domicile for all who wish to visit her, including Sahrawis.