Crimean human rights defender Server Mustafayev has recovered from a viral respiratory infection he suffered from for almost a month. During his illness he received inadequate medical care and he continued to be brought to appear in court. His trial before a Russian military court has been adjourned and he remains in detention. Server Mustafayev’s health remains frail which makes him more vulnerable to COVID-19. He is a prisoner of conscience and should be immediately and unconditionally released. 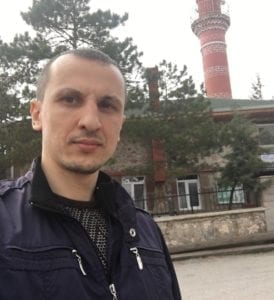 I am writing concerning Server Mustafayev, who is currently standing trial before the Southern Region Military Court and facing up to 25 years in jail if convicted. He is a human rights defender from Crimea and the founder of the grassroots movement Crimean Solidarity, created following the Russian occupation of Crimea to support victims of political and religious persecution. He is a prisoner of conscience and should be freed immediately and unconditionally.

At the beginning of March, Server Mustafayev and two co-defendants Memet Belyalov and Seyran Saliyev developed symptoms of a viral respiratory infection (VRI) but were not provided with adequate medical care. Suffering from fever and other symptoms, they continued to be brought to appear in court hearings for hours at a time. Server Mustafayev’s requests for medical tests and treatment were rejected and the notes to the court on his state of health were reportedly issued by the pre-trial detention facility’s medic without a proper examination.

Server Mustafayev has now recovered from the VRI but his health has deteriorated, and he may be at higher risk of contracting COVID-19 in detention. The UN High Commissioner for Human Rights and the Council of Europe’s Commissioner for Human Rights have called on states to consider the release of prisoners and persons on remand to prevent large scale COVID-19 outbreaks in places of detention, and to save lives. Both stressed the need to release those who have been detained for critical, dissenting views.

I urge you to take all the necessary steps to ensure that Server Mustafayev is released immediately and unconditionally, and that all charges against him are dropped; and pending his release, ensure he has access to adequate medical care in accordance with international human rights standards.