Citizen journalist Zhang Zhan, who has been on partial hunger strike in protest of her incarceration, is at grave risk of death and her family do not expect her to live through the winter if she is not released on medical grounds. Her family learned on October 14, 2021, through a video call that was cut short by the authorities, that Zhang Zhan had again been restrained for 11 days to prevent the removal of her feeding tube. An intervention that violates the absolute prohibition of torture and other ill-treatment while in detention. The Chinese government must release Zhang Zhan immediately so that she can end her partial hunger strike and receive the appropriate medical treatment she so desperately needs to stay alive. 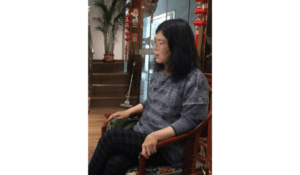 I am writing to express grave concern for the life of citizen journalist Zhang Zhan (张展), who has been on partial hunger strike in protest of her incarceration. A prisoner of conscience imprisoned solely for peacefully exercising her right to freedom of expression when she reported about COVID-19, Zhang Zhan should not have spent a single day in prison.

It is alarming to learn that, due to her dire health condition, Zhang Zhan’s family do not expect her to live through the winter if she is not immediately released on medical grounds. Feeling incredibly weak, she reportedly has no energy to walk nor raise her head and, with yellowed skin, looks to be suffering from a life-threatening condition.

Following an interrupted video call on October 14, 2021, her family were distressed to find out that Zhang Zhan had again been forced fed and was restrained for 11 days to prevent her removing her feeding tube. Instead of respecting her right to express her opinion and her choice to be on hunger strike, the prison authorities punished her in a manner that violated the absolute prohibition of torture and other ill-treatment, going against China’s obligations under international human rights law.

It is further worrying that Zhang Zhan still does not have regular access to her family members and lawyers and there is no way to verify her health and wellbeing.

There is an alarming pattern of deaths of imprisoned Chinese activists, either in detention or after being belatedly released on medical parole. To ensure that no one else dies while in your detention facilities, I urge you to: