On June 23, 2021 the Moscow District Court in Nizhnii Novgorod extended Mikhail Iosilevich’s arbitrary detention until August 28, 2021. His trial may start in September. He is accused of cooperation with an “undesirable” organization, a “crime” punishable by up to six years’ imprisonment. Mikhail Iosilevich is being targeted for peacefully exercising his rights to freedom of expression and association. Charges against him must be dropped and he must be immediately released. 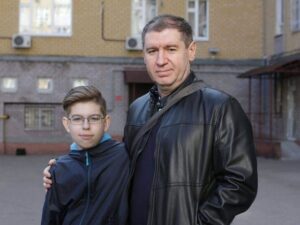 I am writing to express my dismay about the arbitrary detention and ongoing unfounded criminal prosecution of civil society activist Mikhail Iosilevich.

On October 8, 2020, Mikhail Iosilevich was charged under Article 284.1 of the Russian Criminal Code for his alleged cooperation with an “undesirable organization”. The investigators purport that he provided premises for a training conducted by Open Russia, an organization whose UK registered namesake is listed as “undesirable”. This is a “crime” only under Russian legislation, which contravenes Russia’s international human rights obligations and must be repealed. Moreover, the prosecution of Mikhail Iosilevich is completely unfounded; the training had been conducted by another organization, Golos, (a Russian movement of election monitors), and there is no evidence of his involvement with Open Russia.

On January 30, 2021, a district court remanded Mikhail Iosilevich for allegedly making a threatening phone call to a “witness” in his case. An expert examination of the audio recording of the alleged call concluded that it was not Mikhail Iosilevich’s voice. However, the Nizhnii Novgorod Regional Court rejected Mikhail Iosilevich’s appeal and supported his detention. His detention was subsequently extended, the last time until August 28, 2021. It is expected that the case will be submitted to court shortly after. Mikhail Iosilevich has committed no internationally recognizable crime. He is being targeted for his peaceful activism and for the peaceful exercise of his rights to freedom of expression and association.

I urge you to ensure Mikhail Iosilevich’ immediate release and an end to his unfounded criminal prosecution.